Canadian Imperial Bank of Commerce (CM - Free Report) will not be able to go ahead with its plan of selling a significant portion of its majority stake in FirstCaribbean International Bank Ltd.

In November 2019, Canadian Imperial entered a $797-million deal to sell about two-thirds of its stake in its Caribbean unit to GNB Financial Group Ltd. However, yesterday, the bank announced that the deal is being scrapped for not receiving approval from FirstCaribbean's regulators.

Harry Culham, the group head of Capital Markets, who also oversees FirstCaribbean, stated, “While this transaction would have supported FirstCaribbean's long-term growth prospects, it is only one way of creating value for stakeholders. FirstCaribbean is focused on building deep, long-lasting client relationships in the Caribbean, optimizing our business, and enhancing efficiency over time. We remain committed to executing on our long-term strategy and delivering the best outcome for clients, shareholders, team members and communities.”

Notably, Canadian Imperial is not the only bank that has had to face difficulties in trying to exit a disappointing acquisition.

A couple of years back, Bank of Nova Scotia (BNS - Free Report) faced similar regulatory rejection when it tried to part with operations in Antigua and Barbuda. Also, in December 2019, Royal Bank of Canada (RY - Free Report) announced the sale of its Eastern Caribbean operations. However, the deal is yet to be finalized.

The difficulties faced by these Canadian banks in trying to exit the not-so-profitable Caribbean markets comes especially at a time when these banks are sitting with record levels of capital because of the restrictions imposed on share buybacks and dividend hikes amid the pandemic.

Over the past six months, shares of Canadian Imperial have gained 24.2% compared with the industry’s rally of 29.5%. 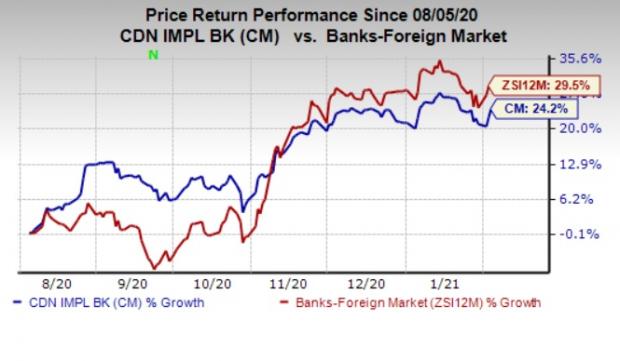 A better-ranked stock from the finance space is mentioned below.

AllianceBernstein Holding L.P. (AB - Free Report) : The company’s earnings estimates for 2021 have moved up 12.1% over the past 60 days. Its shares have gained 33.1% over the past six months. At present, it carries a Zacks Rank #2 (Buy). You can see the complete list of today’s Zacks #1 Rank (Strong Buy) stocks here.