Earnings per share (EPS) in the first quarter amounted to $1.03, which surpassed the Zacks Consensus Estimate by 9.6% and rose 13.2% year over year. The bottom line was primarily driven by surge in operating income.

Revenues of $945.6 million beat the consensus mark by 8.9% and increased 15.6% year over year. The uptick was driven by higher revenues in all the segments (U.S. Services segment, U.S. Federal Services Segment and Outside the U.S. segment).

Shares of MAXIMUS have gained 9% in the past year against 2.7% growth of the industry it belongs to. 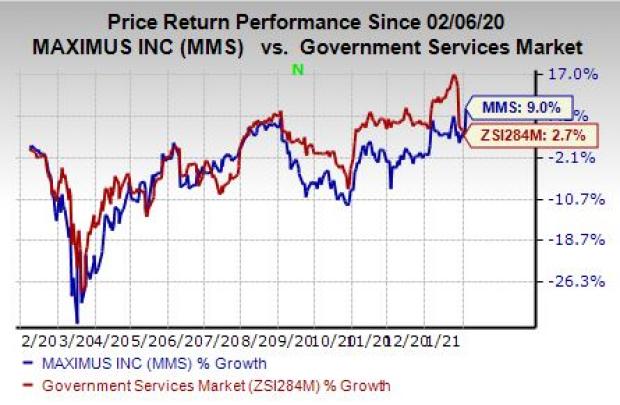 U.S. Services segment revenues of $384.9 million increased 23.3% (all organic) year over year, mainly owing to new work. The uptick was primarily driven by an estimated $114 million of COVID-response work.

Outside the U.S. segment revenues of $155.4 million increased 11.5% year over year on a reported basis. This segment has realized growth driven by job placement activities in Australia on the back of seasonal spike in demand for qualified job seekers during the holiday season.

This Zacks Rank #3 (Hold) company ended the quarter with cash and cash equivalents of $132.6 million compared with $71.7 million in the prior quarter. The company generated $98.1 million of cash from operations. Free cash flow is $89 million. MAXIMUS paid out dividends of $17.2 million.
You can see the complete list of today’s Zacks #1 Rank (Strong Buy) stocks here.

Rollins’ (ROL - Free Report) fourth-quarter 2020 adjusted earnings of 13 cents per share came ahead of the consensus estimate and rose from the year-ago quarter’s tally by 18.2%. Revenues of $536.3 million beat the consensus mark by 1.7% and increased 6% year over year.

IHS Markit’s (INFO - Free Report) fourth-quarter fiscal 2020 adjusted earnings per share of 72 cents beat the Zacks Consensus Esimate by 7.5% and increased 11% on a year-over-year basis. Total revenues came in at $1.11 billion, marginally missing the consensus mark and declining 1% from the year-ago quarter’s levels on a reported basis.