Xerox Holdings Corporation (XRX - Free Report) announced yesterday that it has appointed Jacques-Edouard Gueden as executive vice president and president of Europe, Middle East & Africa (EMEA) Operations. He has been on these roles on an interim basis since September-end.

During his 32 years tenure with Xerox, Gueden has served several leadership positions. Most recently, he was president of France, Belgium and Luxembourg before which he served as senior vice president of EMEA Business Operations and Marketing.

John Visentin, Xerox's vice chairman and CEO said, "Jacques-Edouard will be responsible for Xerox’s go-to-market teams across EMEA to bring Xerox’s full portfolio of products, services and software to new and existing clients and partners."

Thus,the appointment seems to be a part of Xerox’s aggressive product development program for new high-growth markets, a counter strategy that the company has been using to handle declining sales due to decreased demand for paper-related systems and products.

Xerox recently reported its fourth-quarter 2020 results in which adjusted earnings per share of 58 cents missed the Zacks Consensus Estimate by 3.3% and declined 56.4% year over year. Total revenues of $1.93 billion surpassed the consensus mark by 1.9% but declined 21% year over year. The coronavirus pandemic had a significant negative impact on the company’s quarterly results.

Xerox’s shares have gained 47.1% over the past six months compared with 41.7% rally of the industry it belongs to. 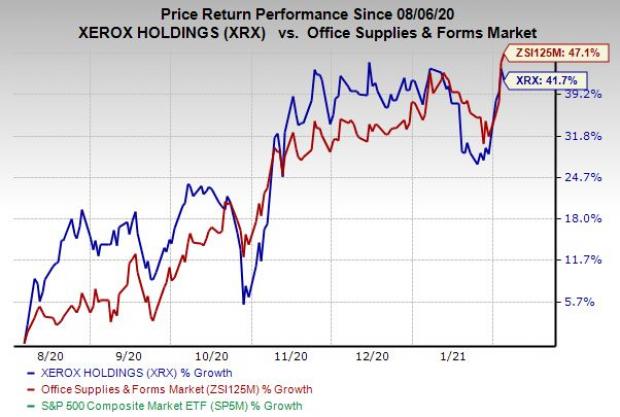 The long-term expected earnings per share (three to five years) growth rate for SailPoint, NV5 Global and TeleTech is 15%, 18% and 19.4%, respectively.

CRISPR (CRSP) to Report Q4 Earnings: What's in the Cards?