Deutsche Bank Aktiengesellschaft (DB - Free Report) along with three other foreign lenders has been punished by Taiwan’s central bank in a currency speculation case.

On Sunday, the central bank of Taiwan issued a statement that said it banned Deutsche Bank’s Taipei branch from trading Taiwan dollar deliverable and non-deliverable forwards, and it has suspended the company for two years from trading foreign exchange derivatives.

The punishment comes a while after the central bank opened a probe to crack down on currency speculation amid the rapid appreciation of the Taiwan dollar.

Currently, the Taiwan dollar is at its highest in more than 23 years against the U.S. dollar.

Per the central bank, branches and subsidiaries of six foreign banks in Taiwan helped some eight grain merchants build $11 billion in their Taiwan dollar deliverable forwards positions as part of their efforts to speculate local currency, which affected the stability of Taiwan's forex market.

Out of the six banks, two voluntarily stopped the transactions and settled the unexpired positions as soon as they got to know about abnormality in the merchants’ financial reports and business situation, and hence the central bank settled the case with them in November 2020.

However, Deutsche Bank along with ING Group NV (ING - Free Report) , Australia and New Zealand Banking Group Limited (ANZBY - Free Report) and Citigroup (C - Free Report) has to face punishment for the involvement in the case.

A spokesperson for Deutsche Bank said, “We are working closely with the CBC and our clients to ensure that FX transactions involving the Taiwan Dollar have a genuine underlying need, and remain committed to playing a constructive role in the ongoing development of Taiwan's capital markets.”

However, Citigroup and Australia & New Zealand Banking Group declined to comment, while the representatives for ING Bank did not respond to requests for comment.

While Deutsche Bank's cost-control efforts and its several strategic initiatives are expected to support financials in the quarters ahead, litigation issues due to its past business misconducts remains a key concern. These might lead to higher legal costs in the future, thereby, hurting the bottom line.

Over the past six months, shares of the company have gained 12.1% compared with 30.9% growth recorded by the industry it belongs to. 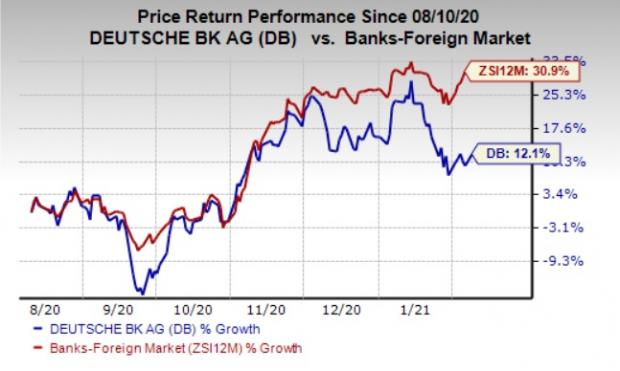