1. SkyWest, currently carrying a Zacks Rank #3 (Hold), incurred a loss of 93 cents per share in the fourth quarter of 2020, wider than the Zacks Consensus Estimate of a loss of 87 cents. However, in the year-ago period, the company reported earnings of $1.43 per share. Meanwhile, quarterly revenues of $589.6 million surpassed the Zacks Consensus Estimate of $530 million but declined 20.7% year over year.

2. Copa Holdings posted a loss (excluding $1.97 from non-recurring items) of $2 per share in fourth-quarter 2020, wider than the Zacks Consensus Estimate of a loss of $1.90. However, in the year-ago quarter, the company reported earnings of $2.17 per share. Meanwhile, quarterly revenues of $158.6 million beat the Zacks Consensus Estimate of $153.4 million. However, the top line plunged 76.7% year over year with passenger revenues (accounted for 93% of the top line) declining 77.6%.

On a consolidated basis, traffic (measured in revenue passenger miles or RPMs) fell 75.8% and capacity (measured in available seat miles/ASMs) slumped 72.6%. As traffic decline was more than the amount of capacity contraction, load factor (% of seats filled with passengers) fell 10 percentage points to 75.3% in the reported quarter. Total operating expenses declined 61.8% year over year to $253.7 million, backed by lower passenger servicing and lower fuel cost.

Copa Holdings currently expects its capacity to reach 2.6 billion or around 40% of the capacity during the first quarter of 2019. Total revenues are expected in the range of $170-$200 million or indicate approximately 25-30% of the total revenues reported for the first quarter of 2019. Cash consumption (excluding any proceeds from asset sales and extraordinary financing activities) is expected to increase to a range of $40-$45 million per month. However, due to uncertainties stemming from the COVID-19 pandemic, the company is not providing 2021 financial guidance.

3. Despite the recent improvement, air-travel demand continues to be behind the year-ago levels. Consequently, Gol Linhas’ traffic, measured in revenue passenger kilometers, tumbled 37.2% year over year in January. With travel demand falling below the year-ago levels, the company reduced capacity significantly. In January, capacity measured in available seat kilometers contracted 36.6%.

5. Spirit Airlines suffered a loss of $1.61 per share for the fourth quarter, wider than the Zacks Consensus Estimate of a loss of $1.44. However, in the year-ago quarter, the company delivered earnings of $1.24. Additionally, operating revenues of $498.5 million fell short of the Zacks Consensus Estimate of $521.8 million. The top line, moreover, deteriorated 48.6% year over year due to the coronavirus-led air-travel demand disaster. Passenger revenues, which contributed 97.9% to the top line, plummeted 48.7% year over year. Additionally, revenues from other sources tanked 44.2%. Load factor declined 13.3 percentage points to 71.5% as traffic contraction (37.1%) was more than the capacity dip (25%).

Moreover, CASM excluding operating special items and fuel (non-fuel unit costs), escalated 25.2% in the reported quarter due to reduced capacity. Daily cash burn in the quarter was $1.8 million, on average. Spirit ended the year with unrestricted cash, cash equivalents and short-term investments worth $1.9 billion. Capital expenditures for 2020 were $537 million. The carrier expects first-quarter 2021 capacity to shrink 17% from the levels achieved in first-quarter 2019. Fuel cost per gallon and effective tax rate in the March quarter are anticipated to be $1.75 and 21%, respectively. Adjusted EBITDA margin is projected between -45% and -55%.

The following table shows the price movement of leading airline players over the past week and during the past six months. 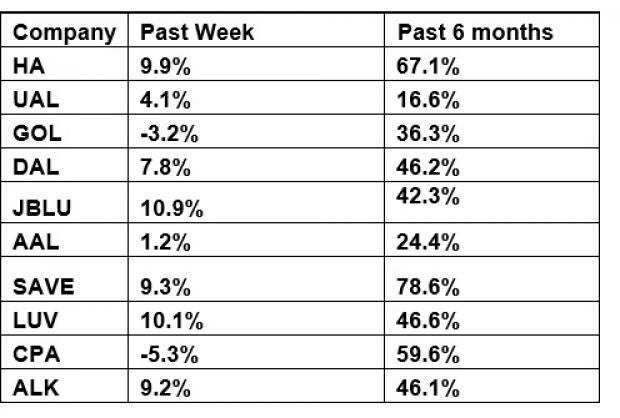 The table above shows that majority of the airline stocks have traded in the green over the past week. Evidently, the NYSE ARCA Airline Index has gained almost 9% over the past week to $92.12. Over the course of six months, the sector tracker has surged 63%.

Investors will look forward to the update on a further financial aid for airlines.