Advanced Energy Industries, Inc. (AEIS - Free Report) reported fourth-quarter 2020 non-GAAP earnings of $1.49 per share, beating the Zacks Consensus Estimate by 9.6%. Further, the bottom line was within the management’s guidance of $1.10 to $1.50 per share.

The bottom line also improved 71.3% from the year-ago quarter but declined 10.2% sequentially.

Revenues of $370.97 million surpassed the Zacks Consensus Estimate of $365.03 million and were within management’s guidance of $340-$380 million. Moreover, the top line rose9.7% from the year-ago quarter but decreased 4.8% from the prior quarter.

The year-over-year improvement in the top line can be attributed to favorable demand conditions. Further, a strong momentum across semiconductor equipment, and telecom and networking contributed well.

Further, a solid performance delivered by the company across North America, Asia and other countries was a major upside.

However, the coronavirus-induced supply-chain constraints remained concerns. Further, weakening momentum across data centers, and industrial and medical was an overhang. Also, softness in the European region was a negative.

Shares of Advanced Energy have returned 40.7% over a year, underperforming the industry’s rally of 72%.

All these factors are likely to help the stock rebound in the near term. 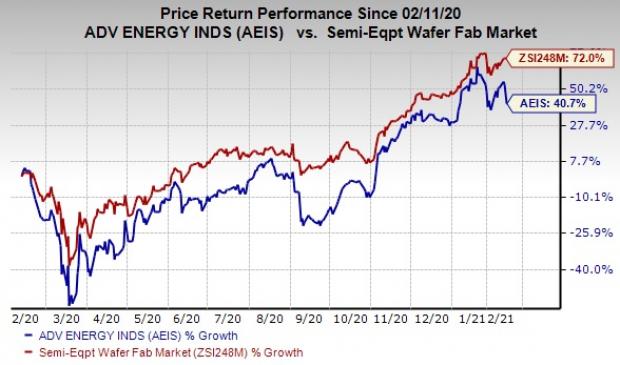 Industrial & Medical revenues fell 3.1% year over year to $93.8 million (25.3% of revenues).Sluggishness in the demand for some critical care equipment and elective care applications remained an overhang.

Telecom & Networking revenues were $46.1 million (12.4% of revenues), up 19.9% from the prior-year quarter. Strong 5G investments remained a major positive.

Data Center Computing revenues were $65.3 million (17.6% of revenues), down 16.2% from the year-ago quarter. This was primarily attributed to a weak demand environment, owing to data center digestion among hyperscale customers. Further, a slowdown in IT spending remained worrisome.

In the fourth quarter, non-GAAP gross profit was 39.5%, which expanded 360 basis points (bps) from the year-ago quarter.

Non-GAAP operating expenses were $76.9 million, down 1.4% year over year. As a percentage of revenues, the figure contracted 240 bps from the year-ago quarter to 20.7% in the reported quarter.

During the fourth quarter, cash flow from operations was $67.1 million compared with $67.5 million in the third quarter.

Further, the company generated free cash flow of $56 million in the reported quarter.

For first-quarter 2021, Advanced Energy expects non-GAAP earnings between $1.10 and $1.40 per share. The Zacks Consensus Estimate is pegged at $1.28 per share.

Further, the company anticipates revenues of $335-$365 million. The Zacks Consensus Estimate for the same is projected at $367.3 million.

Long-term earnings growth rates for GoDaddy, CrowdStrike and Garmin are currently pegged at 25%, 25% and 6.8%, respectively.