Barring one-time items, adjusted earnings per share were 51 cents in the quarter. The figure topped the Zacks Consensus Estimate of 44 cents.

Revenues were $1,668 million, up around 1% year over year. The top line surpassed the Zacks Consensus Estimate of $1,635.2 million. Higher sales in the Polyurethanes segment were offset by declines across other units in the reported quarter.

Polyurethanes: Revenues for the segment rose 5% year over year to $1,030 million in the reported quarter due to higher MDI (methylene diphenyl diisocyanate) average selling prices. MDI sales volumes fell in the quarter due to unplanned supplier outages.

Performance Products: Revenues for the unit fell 5% to $265 million due to reduced average selling prices as well as lower sales volumes resulting from weak market conditions across several of the company’s amines businesses.

Advanced Materials: Revenues for the unit dropped 14% to $207 million on lower sales volumes, especially due to weakness in aerospace and commodity markets.

Textile Effects: Revenues for the division fell 4% to $173 million. The decline was due to reduced average selling prices, partly offset by increased sales volumes.

Net cash provided by operating activities from continuing operations was $167 million for the fourth quarter while free cash flow was $88 million.

Moving ahead, Huntsman said that it is witnessing improvements over 2020 in most of its core markets.  The company also remains focused on enhancing shareholder value. 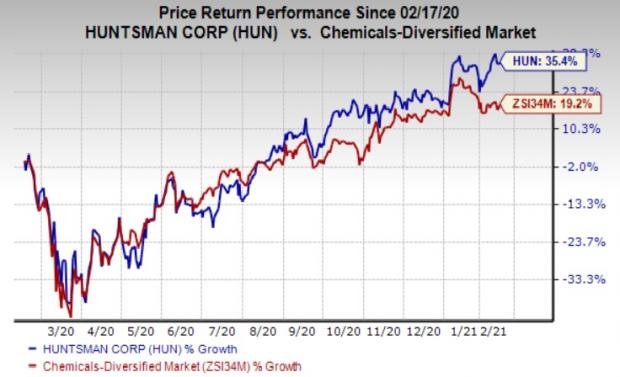 Impala Platinum has an expected earnings growth rate of 189.4% for the current fiscal. The company’s shares have rallied around 45% in the past year. It currently carries a Zacks Rank #1 (Strong Buy). You can see the complete list of today’s Zacks #1 Rank stocks here.

Fortescue has a projected earnings growth rate of 78.4% for the current fiscal. The company’s shares have surged around 154% in a year. It currently sports a Zacks Rank #1.

New Gold has a projected earnings growth rate of 1,150% for the current year. The company’s shares have shot up around 133% in a year. It currently carries a Zacks Rank #2.

Barrick (GOLD) to Post Q4 Earnings: What's in the Offing?