Revenues came in at $85.8 million, which also beat the Zacks Consensus Estimate of $51 million. Revenues were up 91.1% year over year, mainly driven by higher license and milestone fees.

ImmunoGen’s shares soared 30.3% on Feb 12, following the strong quarterly results and bullish outlook for 2021. Shares of the company have gained 54.9% so far this year compared with the industry’s increase of 8.3%. 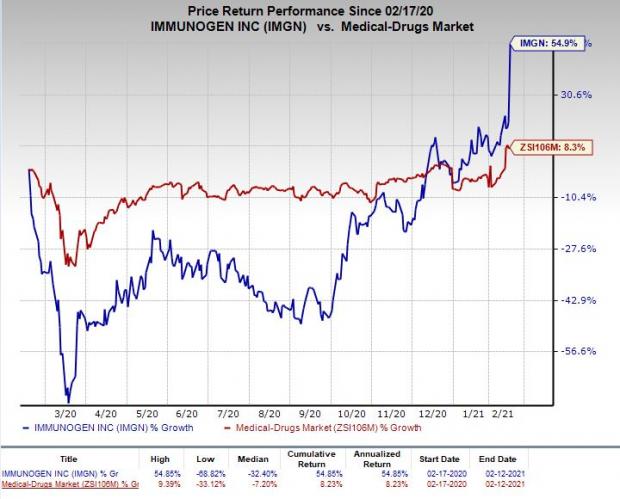 For the fourth quarter, Immunogen reported license and milestone fees of $62.4 million compared with $29.6 million in the year-ago period. The significant rise was due to recognition of $60.5 million from Jazz Pharmaceuticals (JAZZ - Free Report) as upfront payment related to a collaboration agreement for hematology programs.

During the quarter, research and development expenses increased 51.9% from the year-ago level to $39.6 million. The significant increase was due to higher clinical activity related to its lead pipeline candidate, mirvetuximab soravtansine, and to support its potential commercial launch expected next year.

General and administrative expenses decreased 0.7% to $9.7 million in the fourth quarter of 2020.

ImmunoGen is evaluating its lead pipeline candidate, mirvetuximab soravtansine, in a pivotal study — SORAYA — in platinum-resistant ovarian cancer patients. The company expects the data from this study to form the basis of the candidate’s regulatory filing under accelerated pathway for ovarian cancer. Top-line data from the SORAYA study is expected in the third quarter of 2021. A biologics license application is expected to be filed by 2021-end.

The company is enrolling patients in the confirmatory phase III MIRASOL study, which compared, mirvetuximab soravtansine, head-to-head with single agent chemotherapy in platinum-resistant ovarian cancer patients with high folate receptor alpha expression. Top-line data is expected in the first half of 2022. Data from the MIRASOL study will support its continued approval of the candidate in the indication.

In October, the company entered into an exclusive collaboration agreement with China-based Huadong Medicine to develop and commercialize mirvetuximab soravtansine in mainland China, Hong Kong, Macau, and Taiwan. The National Medical Products Administration of China has accepted an investigational new drug (“IND”) application to support initiation of clinical study in the country.

The company has another promising candidate, IMGN632, in its pipeline. It is being developed in clinical studies as monotherapy or in combination with Bristol-Myers’ (BMY - Free Report) Vidaza or AbbVie/Roche’s Venclexta for treating acute myeloid leukemia (“AML”). It is also developing IMGN632 monotherapy in a phase I/II in patients with blastic plasmacytoid dendritic cell neoplasm and acute lymphocytic leukemia. During the quarter, the company amended the study to include a pivotal cohort, following a discussion with the FDA.

The company initiated a phase I study on IMGC936 to evaluate it in solid tumors recently. The company will co-develop the candidate with MacroGenics. Initial data from the study is expected later this year or early 2022. The company plans to file an IND application with the FDA for a new candidate, IMGN151, by year-end.

ImmunoGen provided its guidance for revenues, operating expenses and cash resources in 2021. The company expects revenues for the full year to be between $65 million and $75 million. The Zacks Consensus Estimates for 2021 revenues stands at $55.76 million.

It expects cash resources to be enough to fund its operations through the second half of 2022.