The EU approval was expected, as in December 2020, the Committee for Medicinal Products for Human Use of the European Medicines Agency adopted a positive opinion, recommending the approval of Tukysa combo for the given indication.

Per the company, following the nod in Europe, Tukysa became the first HER-2 TKI combination regimen to improve overall and progression-free survival in previously treated patients with metastatic HER2-positive breast cancer regardless of brain metastases.

Shares of Seagen have declined 5.3% year to date against the industry’s increase of 12.1%. 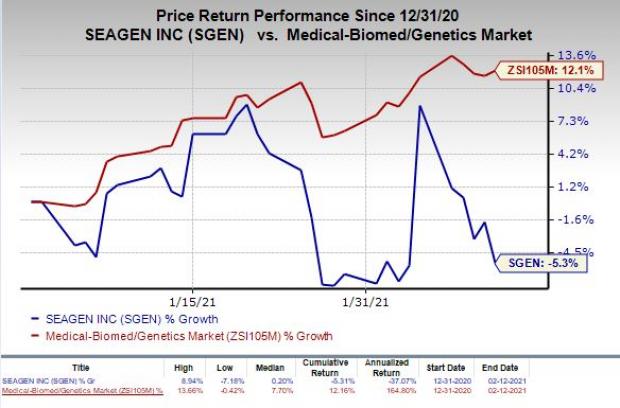 Notably, in April 2020, the FDA approved the same Tukysa combo to treat adult patients with locally advanced/metastatic HER2-positive breast cancer including those with brain metastases, having received one or more prior anti-HER2-based regimens in the metastatic setting.

In fourth quarter of 2020, Tukysa’s generated sales worth $61.4 million, increasing 44.8% sequentially. The nod in Europe should boost the drug’s sales in 2021

In a separate press release, Seagen announced primary results from the phase III EV-301 study which is comparing Padcev to chemotherapy for treating locally advanced/metastatic urothelial cancer in adult patients having previously been treated with platinum-based chemotherapy and a PD-1/L1 inhibitor.

Data from the study showed that patients who were treated with Padcev lived a median of 3.9 months longer than those who received chemotherapy, while median overall survival was 12.9 months as compared to 9 months in the chemotherapy arm.

Data from the EV-301 study will support global registrations for Padcev to address the given indication.

AutoNation (AN) to Report Q4 Earnings: What's in the Cards?