IPG Photonics Corporation (IPGP - Free Report) delivered fourth-quarter 2020 earnings of 92 cents per share, reversing the loss of 8 cents reported a year ago. Management projected earnings between 75 cents and $1.05 per share.

Notably, an unfavorable foreign-exchange movement curtailed 7 cents from bottom line and a goodwill impairment charge reduced it by 20 cents.

The company anticipates gaining from strength in new products, low-cost production capabilities, technology differentiation and an expanding global presence in 2021.

The Zacks Consensus Estimate for fourth-quarter earnings and revenues was pegged at 96 cents and $310.8 million, respectively. 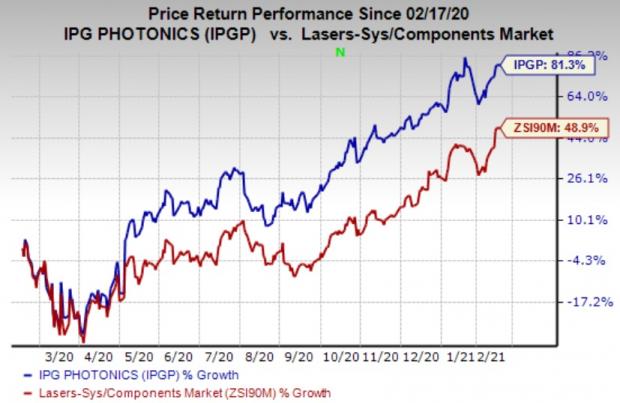 Notably, shares of IPG Photonics have returned 81.3% in the past year compared with the industry’s rally of 48.9%.

Revenues from other applications (10%) improved 12% year over year to almost $34 million, driven by the growing traction from advanced applications and a solid uptick in devices utilized in medical procedures.

Sales of high-power continuous wave (CW) lasers (55% of total revenues) were up 17% from the year-ago quarter’s tally.

By geography, sales surged 52% in China and declined 5% in Europe, 29% in Japan and 11% in North America on a year-over-year basis.

During the fourth quarter, emerging product and application sales contributed 28% to total revenues and climbed 22% year over year as well.

IPG Photonics reported a gross margin of 43.6%, which expanded 310 basis points (bps) on a year-over-year basis. This can be attributed to low-cost production capabilities, higher revenue base and a favorable product mix. Management noted that an additional inventory charge of $14 million contracted the gross margin by 410 bps.

Operating margin came in at 19.4% compared with the year-ago quarter’s figure of 0.1%.

The company generated $85 million as cash flow from operations compared with the prior-quarter figure of $70 million.

The company did not repurchase any stock during the fourth quarter. Capital expenditures came in at $26 million compared with $25 million in the prior quarter.

Challenging business environment due to global economic downturn amid coronavirus-induced crisis remains a headwind. Nevertheless, management anticipates gaining from a solid order flow for frame agreements and bookings in China, which was strong “in the first weeks of the year”.

Revenues from the core materials processing market are expected to rise on the back of momentum in higher power products. The company is optimistic about its ability to grow in other applications beyond cutting and welding, which include budding avenues across electric vehicle battery processing and advanced applications as well as devices used in the medical and micro-processing industry. Moreover, strength in new solutions holds promise.

For first-quarter 2021, IPG Photonics anticipates sales to be $310-$340 million. The Zacks Consensus Estimate is currently pegged at $305.6 million.

Earnings are projected between 90 cents and $1.20 per share. The mid-point of this guided range — $1.05 — is higher than the Zacks Consensus Estimate, which currently stands at 96 cents per share.

Shopify, Workday and CrowdStrike are scheduled to release earnings on Feb 17, Feb 25 and Mar 16, respectively.

Long-term earnings growth rate for Shopify, CrowdStrike and Workday is currently pegged at 32.5%, 25%, and 25.36%, respectively.