Ternium (TX) to Report Q4 Earnings: What's in the Cards?

Ternium S.A. (TX - Free Report) is slated to release fourth-quarter 2020 results after the closing bell on Feb 23. Benefits of higher steel shipments and prices are likely to reflect on its fourth-quarter results.

The Luxembourg-based company surpassed the Zacks Consensus Estimate in each of the trailing four quarters, the average being 178.5%.  It posted an earnings surprise of 165.2% in the last reported quarter. 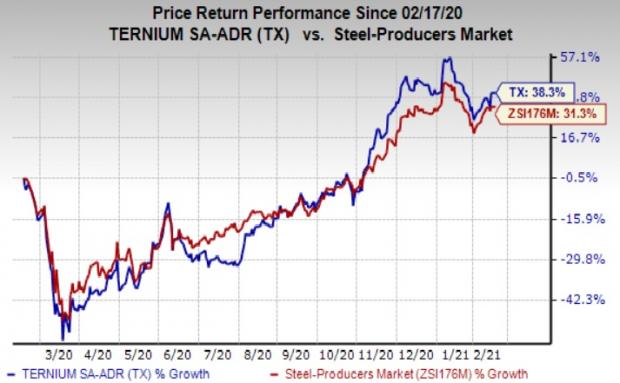 The Zacks Consensus Estimate for fourth-quarter consolidated revenues for Ternium is currently pegged at $2,459.3 million, which calls for a rise of 5.1% year over year.

Our proven model predicts an earnings beat for Ternium this time around. The combination of a positive Earnings ESP and a Zacks Rank #1 (Strong Buy), 2 (Buy) or 3 (Hold) increases the chances of an earning beat.

Earnings ESP: Earnings ESP for Ternium is +3.04%. The Zacks Consensus Estimate for earnings for the fourth quarter is currently pegged at $1.15. You can uncover the best stocks to buy or sell before they’re reported with our Earnings ESP Filter.

The company is likely to have benefited from higher shipments and prices in the fourth quarter. Ternium, in its third-quarter call, said that it expects EBITDA to increase in the fourth quarter on a sequential comparison basis on higher shipments and realized steel prices in its major markets. The company is expected to have benefited from sustained recovery in shipments in Mexico, its main steel market. Shipments are also likely to have been supported by a recovery in automotive, household appliances and HVAC industries on strong demand in the United States and an improvement in the construction market.

The company also saw shipments to climb 59% sequentially in the third quarter in the Southern Region after record-low shipments in the second quarter. The trend is likely to have continued in the fourth quarter.

Ternium also witnessed a 5% sequential increase in average realized price in the third quarter. The pricing strength, backed by heathy steel prices in the North American market, is expected to have continued in the December quarter and supported the company’s top line.

Teck Resources Limited TECK, scheduled to release earnings on Feb 18, has an Earnings ESP of +5.57% and carries a Zacks Rank #3. You can see the complete list of today’s Zacks #1 Rank stocks here.

Koppers Holdings Inc. KOP, scheduled to release earnings on Feb 24, has an Earnings ESP of +23.20% and carries a Zacks Rank #3.

Hecla Mining Company (HL - Free Report) , scheduled to release earnings on Feb 18, has an Earnings ESP of +7.14% and carries a Zacks Rank #3.