Net sales rose roughly 18% year over year to $2,457.4 million in the quarter. The figure beat the Zacks Consensus Estimate of $2,303.3 million. Sales were driven by gains in all segments and higher year over year prices for phosphates.

Net sales in the Phosphates segment rose roughly 42% year over year to $990 million in the quarter, driven by higher volumes and prices. Sales volumes in the segment went up 15% year over year. The segment’s gross margin per ton improved to $73 from a loss of $52 in the year-ago quarter, aided by lower raw material costs and higher realized prices in the United States and globally.

Potash division’s net sales climbed around 42% year over year to $559 million on the back of higher volumes, partly masked by lower prices. Sales volumes in the segment rose 80% year over year. Gross margin per ton in the quarter was $45, down around 26% year over year.

Net sales in the Mosaic Fertilizantes segment were $823 million, down around 5% year over year. Results were affected by lower prices that offset higher sales volumes. Gross margin per ton was flat year over year at $32.

Moving ahead, the company noted that it expects improving market dynamics that were witnessed in the second half of 2020 to continue through 2021. Demand for grains and oilseeds also remains high along with strong farm economics. Mosaic expects strong global demand for fertilizers this year. Strong demand has also fueled rapid price increases in the United States and globally, the company noted.

Shares of Mosaic have rallied 67.7% over a year compared with the industry’s 54% rise. 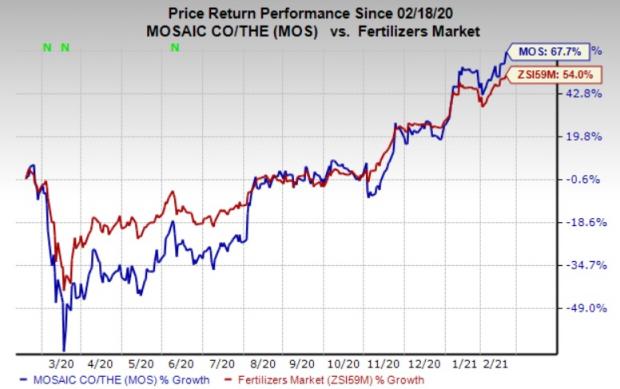 Impala Platinum has an expected earnings growth rate of 195.9% for the current fiscal. The company’s shares have rallied around 43% in the past year. It currently carries a Zacks Rank #1 (Strong Buy). You can see the complete list of today’s Zacks #1 Rank stocks here.

Fortescue has a projected earnings growth rate of 78.4% for the current fiscal. The company’s shares have surged around 153% in a year. It currently sports a Zacks Rank #2 (Buy).

Gold Fields has a projected earnings growth rate of 202.4% for the current year. The company’s shares are up around 28% in a year. It currently carries a Zacks Rank #2.

Here's How NetApp (NTAP) Looks Just Ahead of Q3 Earnings