Adjusted earnings for the reported quarter were $1.17 per share, down from $1.73 a year ago. It, however, topped the Zacks Consensus Estimate of $1.15.

Revenues fell roughly 11% year over year to $879.1 million in the quarter. It surpassed the Zacks Consensus Estimate of $876.2 million. Lower sales across Catalysts and Lithium segments were partly offset by gains in Bromine and other segments. The company also benefited from its cost-savings initiatives.

The Catalysts unit recorded revenues of $195.7 million in the reported quarter, down around 31% year over year. Adjusted EBITDA was $22.1 million, down roughly 71% year over year. The company saw lower volumes in Fluid Catalytic Cracking on a year-over-year basis due to reduced transportation fuel consumption. Hydroprocessing Catalysts volumes also fell in the quarter, impacted by reduced fuel demand.

Moving ahead, Albemarle expects its performance for full-year 2021 to improve modestly on a year-over-year basis on a sustained recovery in global economic activities. 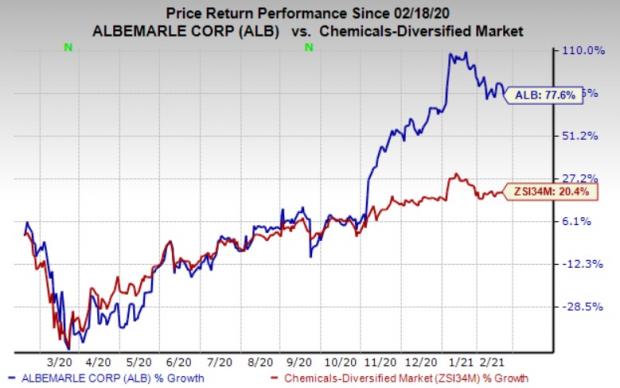 Impala Platinum has an expected earnings growth rate of 195.9% for the current fiscal. The company’s shares have rallied around 43% in the past year. It currently carries a Zacks Rank #1 (Strong Buy). You can see the complete list of today’s Zacks #1 Rank stocks here.

Fortescue has a projected earnings growth rate of 78.4% for the current fiscal. The company’s shares have surged around 153% in a year. It currently sports a Zacks Rank #2 (Buy).

Gold Fields has a projected earnings growth rate of 202.4% for the current year. The company’s shares are up around 28% in a year. It currently carries a Zacks Rank #2.