Adjusted earnings of 68 cents per share beat the Zacks Consensus Estimate by 9.7% but decreased 1.5% year over year. Revenues of $1.39 billion beat the consensus mark by 4.1% and improved 2.7% year over year.

Acquisitions contributed $52.7 million to revenues in the reported quarter.

Over the past year, shares of Waste Connection have declined 4.4% compared with 21.3% decline of the industry it belongs to. 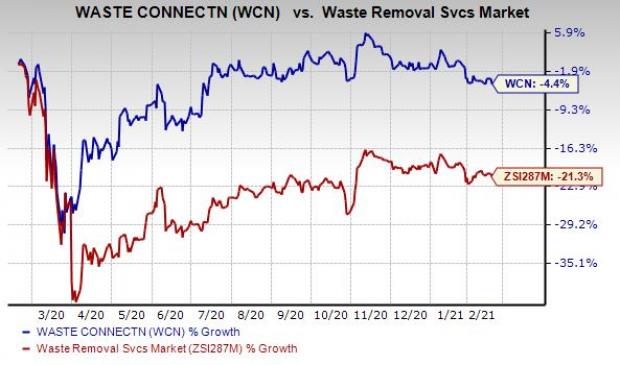 Solid Waste Disposal and Transfer segment revenues increased 3.3% from the year-ago quarter to $292.82 million. The segment contributed 20.9% of total revenues.

Intermodal and Other segment revenues increased 9.3% to $33.36 million. The segment accounted for 2.4% of total revenues.

The company paid out dividend of $53.96 million in the reported quarter.

Waste Connections unveiled its guidance for 2021. The company expects revenues to be around $5.80 billion. The Zacks Consensus Estimate of $5.83 billion lies above the guidance.

Entergy (ETR) to Report Q4 Earnings: What's in the Cards?