Total revenues of $116.7 million also beat the Zacks Consensus Estimate of $106.5 million. However, revenues were down 7.6% year over year. The company records Linzess sales in revenues after deducting certain higher commercial costs and expenses. These expenses were higher year over year during the quarter leading to decline in sales.

Ironwood's share of net profits from sales of Linzess in the United States (included in collaborative revenues) was $110.7 million in the fourth quarter, up approximately 9% year over year.

Per data provided by IQVIA, volume of prescribed Linzess capsules in the fourth quarter increased about 8% year over year.

Revenues also include $3.5 million in linaclotide royalties, co-promotion and other revenues. The company recorded $2.5 million from sales of linaclotide API to its partners.

We note that Ironwood has agreements with two partners — Astellas Pharma and AstraZeneca (AZN - Free Report) — related to the development and commercialization of Linzess in Japan and China, respectively. Ironwood records royalties on sales of Linzess from these companies in their respective territories. The company also records fixed payments and royalties on sales of Alnylam Pharmaceuticals’ (ALNY - Free Report) Givlaari per an education and promotional agreement for the drug in the United States. Per an amendment to the agreement, the company will stop receiving fixed payments and will only record royalties on Givlaari sales, beginning 2021.

Ironwood reported revenues of $389.5 million, down 9.1% year over year. However, collaboration revenues from Linzess were up 13% year over year to $369 million. The company recorded earnings of 79 cents per share for 2020, up 43.6% from the year-ago period.

Ironwood issued its guidance for Linzess sales and total revenues in 2021. The company expects its total revenues to be between $370 million and $385 million, which suggests year-over-year decline. The Zacks Consensus Estimates for total revenues stands at $424.08 million. It expects sales of Linzess to grow 3%-5% in 2021.

The company expects adjusted EBITDA to be more than $190 million for the year.

Despite strong fourth-quarter results, shares of Ironwood were down 2.9% on Feb 17, presumably on a weaker revenue outlook. However, the company’s shares have declined 19.6% in the past year against the industry’s increase of 1.3%. 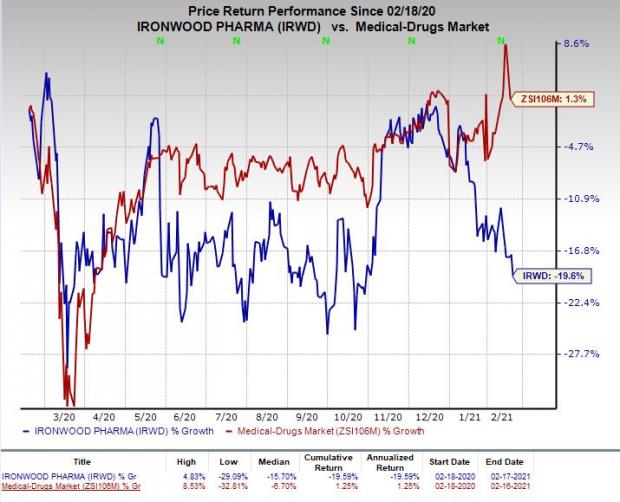 The company announced a few restructuring initiatives following the failure of its lead pipeline candidate, IW-3718. In September, Ironwood announced that IW-3718 failed to meet primary endpoint in one of the two identical phase III studies, evaluating it in refractory gastroesophageal reflux disease ("GERD") patients. Based on the study data, Ironwood discontinued development of IW-3718 and announced an organizational restructuring.

The company substantially completed its plan to reduce its workforce by approximately 100 full-time employees during the fourth quarter.

Following the failure of IW-3718, Ironwood had no clinical-stage candidate in its pipeline. The company plans to file an investigational new drug application for its pre-clinical candidate, IW-3300, in the second half of 2021 to support initiation of an early-stage clinical study. The company is developing the candidate as a potential treatment for visceral pain conditions such as interstitial cystitis/bladder pain syndrome and endometriosis.

B2Gold (BTG) to Report Q4 Earnings: What's in the Cards?