Regal Beloit Corporation (RBC - Free Report) on Feb 16, announced that it has signed an agreement with Rexnord Corporation (RXN - Free Report) to combine operations with the latter’s Process & Motion Control (PMC) segment. Notably, the deal values the PMC segment at about $3.69 billion.

The deal will involve Rexnord to spin off its PMC operating segment and simultaneously merge it with Regal Beloit in a Reverse Morris Trust transaction. Post the deal, which is expected to be completed in the fourth quarter of 2021, Regal Beloit’s shareholders will own 61.4% of the combined entity (“New Regal”), while rest 38.6% will be owned by Rexnord’s shareholders.

Regal Beloit’s shares gained 0.6% in the past couple of days to eventually close the trading session at $129.67 on Wednesday.

Over the past six months, its share price has increased 36.4% compared with the industry’s growth of 31.6%. 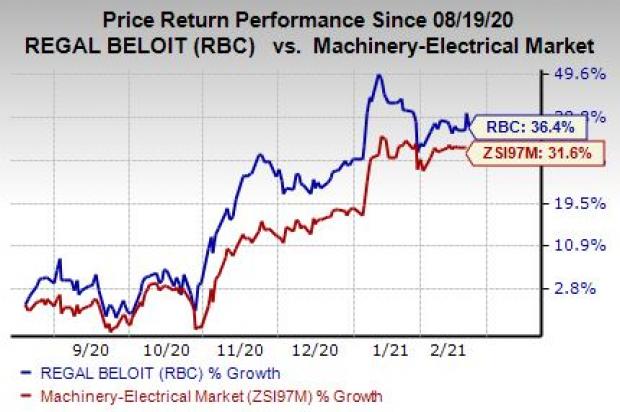 Emerson delivered a positive earnings surprise of 21.53%, on average, in the trailing four quarters.

Franklin Electric delivered a positive earnings surprise of 19.15%, on average, in the trailing four quarters.