News Corporation (NWSA - Free Report) announced that it has entered into a historic multi-year partnership with Alphabet Inc.’s (GOOGL - Free Report) Google. Per the agreement, News Corporation will provide trusted and high-valued journalism content from its news sites around the world in exchange of significant payments from Google.

Market pundits picture the deal as a landmark development in the long-drawn conflict between media companies and online platforms over the use and value of journalism. News Corporation has long been passionate regarding this cause. The company has been demanding online platforms to pay media companies for their output. Notably, the latest deal indicates that the tides in the media world are changing. The historic deal is likely to encourage other online platforms to rightfully compensate media and publishing companies for sharing stories and other journalism content.

As part of the three-year agreement, some of the well-known publications of News Corporation will join Google News Showcase. This includes The Wall Street Journal, Barron’s, MarketWatch and the New York Post. The company’s U.K. publications joining Google includes The Times and The Sunday Times as well as The Sun. Meanwhile in Australia, a range of News Corporation’s platforms, including The Australian, news.com.au, Sky News, as well as multiple metropolitan and local titles will be included in the Google News Showcase.

Market sources highlight that the push by media companies to be paid by online platforms like Google to host articles is justified, as the latter have been unfairly profiting from the work of professional journalists. According to market sources, last year, Google stated that it would start licensing high-quality content from select publication companies across the world, including some from Germany, Australia, Argentina Brazil and the U.K among others. The move forms part of Google’s $1 billion initiative related to the Google News Showcase that enables news companies to share stories.

Moreover, the pact between News Corporation and Google comes amid controversies developing in Australia, where the government is considering forming regulations that will force online platforms to compensate publishing companies for news and other stories. 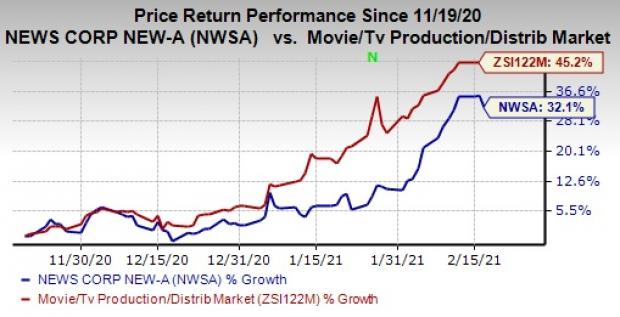 The deal with Google is likely to help News Corporation gain higher revenues for its digital content as well as increase online penetration. Moreover, the company expects the deal to have a positive impact upon journalism at a global scale.

Markedly, shares of this Zacks Rank #2(Buy) company have increased 32.1% in the past three months compared with the industry’s rise of 45.2%.

TEGNA Inc. (TGNA - Free Report) with a Zacks Rank #2, has a trailing four-quarter earnings surprise of 19.8%, on average. You can see the complete list of today’s Zacks #1 Rank (Strong Buy) stocks here.