Meanwhile, harsh winter disrupted the production lines for various automakers last week. Also, we shall take a look at some important announcements made by auto giants including Ford (F - Free Report) and BorgWarner (BWA - Free Report) . Quarterly results and investor-friendly moves by certain companies also captured investors’ attention in the week gone by.

Advance Auto Parts reported adjusted earnings of $1.87 per share, which increased 14% from the prior-year figure but missed the Zacks Consensus Estimate of $1.93. The company generated net revenues of $2,365.1 million, topping the Zacks Consensus Estimate of $2,340 million and increasing 12% year over year. The auto parts retailer projects full-year 2021 net sales of $10.1-$10.3 billion. Comparable store sales growth and adjusted operating income margin are envisioned in the band of 1-3% and 8.7-8.9%, respectively. The firm expects free cash flow of minimum $600 million and intends to open 50-100 stores this year.

Genuine Parts reported adjusted earnings of $1.52 per share, which improved 19.7% year over year and surpassed the Zacks Consensus Estimate of $1.32 per share. The automotive replacement parts supplier reported net sales of $4,251.6 million, missing the Zacks Consensus Estimate of $4,319 million and declining from the year-ago quarter’s $4,279.9 million.The company projects revenues from automotive and industrial sales to witness year-over-year uptick of 4-6% and 3-5%, respectively, in 2021. Full-year earnings are envisioned in the band of $5.55-$5.75 per share. Operating cash flow and capex are projected within $1-$1.2 billion and $275-$325 million, respectively.

LKQ Corp reported adjusted earnings of 69 cents per share, surpassing the Zacks Consensus Estimate of 59 cents and outpacing the year-ago profit of 54 cents. This aftermarket auto parts distributor registered quarterly revenues of $2,953.9 million, topping the Zacks Consensus Estimate of $2,880 million. However, the top-line figure edged down 1.9% year over year. For 2021, the company projects EPS in the range of $2.40-$2.60 per share and adjusted EPS of $2.65-$2.85 per share. The company envisions generating free cash flow of minimum $800 million. The company is targeting free cash flow conversion of EBITDA at 55-60%.

During the week ended Feb 19, a few companies like Genuine Parts, Magna International and AutoNation announced dividend hike or buyback boost, underscoring their commitment to enhance shareholder value. Genuine Parts hiked dividend for the 65th consecutive year in 2021. Quarterly dividend of eighty-one and one-half cents per share is payable on Apr 1, 2021 to shareholders as of Mar 5, 2021. Expected annual payout of $3.26 per share in 2021 implies more than 3% increase from the previous dividend of $3.16. Magna announced fourth-quarter dividend of 43 cents per share, up 7.5% from the previous payout. The dividend will be payable on Mar 19, 2021 to its shareholders of record as of Mar 5, 2021. Meanwhile, AutoNation increased the share-buyback authorization to $1 billion. It now has $1.1 billion remaining under the current share-repurchase authorization.

Even as the semiconductor shortage—which is forcing automakers to idle some of their production lines— continues, weather-related downtimes hit the companies last week. As deep freeze gripped parts of the United States, causing power outages and disruptions, many auto biggies including General Motors (GM), Ford, Stellantis, Toyota and Nissan shuttered their operations. Amid the snowstorm, General Motors suspended production at SUV plants in Arlington and Spring Hill. It also cancelled shifts in a pickup-truck facility in Fort Wayne and the Corvette plant in Kentucky. General Motors’ closest peer Ford shut factories in Michigan, Missouri and Ohio. Ford’s Missouri plant, home to the firm’s super profitable F-150 trucks, remained closed the entire week due to unreasonably cold temperature. Day shift production at Stellantis’ Toledo Assembly facility in Ohio was disrupted. Toyota was forced to halt certain shifts at plants in Indiana, San-Antonio, Kentucky and Mississippi. While Nissan cut the morning and afternoon shifts in Canton, MS, and Smyrna, TN; certain shifts at Honda’s plants in Indiana and Alabama were also halted.

As we know, Ford is leaving no stone unturned to demonstrate its e-mobility prowess. The U.S. auto giant grabbed headlines last week after it announced that it will spend $1 billion to revamp the plant in Cologne, Germany as the company intends to sell only all-electric vehicles (EVs) in Europe by 2030. The move is part of the firm’s $22-billion investment in electrification through 2025 across the world.

EV behemoth Tesla (TSLA - Free Report) slashed prices for the Long Range and Standard Range versions of both Model Y and Model 3. The price cut was initiated as Tesla wants to ramp up deliveries amid stiff competition as various legacy automakers and new EV entrants are introducing latest models. Prices of Long Range Model 3 and Model Y were cut by $1,000 each to $45,990 and $48,990, respectively. The price of Standard Range versions of Model 3 and Y were trimmed by $1,000 and $2,000 to $36,990 and $39,990, respectively.

In line with its electrification push, automotive supplier BorgWarner inked a deal to acquire European battery maker AKASOL for €120 per share in cash for all outstanding shares of the latter. The buyout — which is scheduled for closure by second quarter 2021-end — will bolster BorgWarner’s commercial vehicle and off-highway battery systems business. 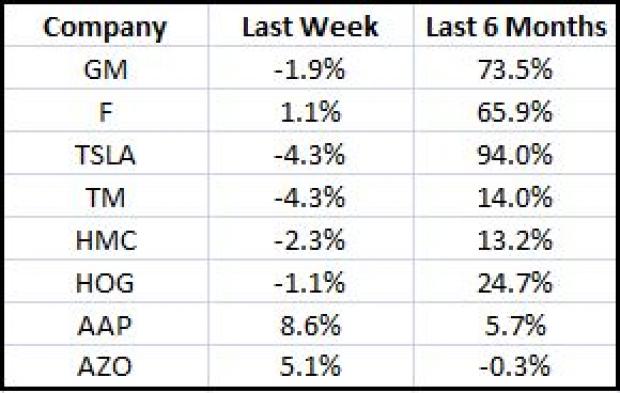 In the past six months, all stocks have increased barring AutoZone, which inched down 0.3%. Over the past week, while Advance Auto Parts has witnessed the maximum gain, Toyota and Tesla have lost the most.

Investors await the quarterly releases from EV pure plays including Nikola, Hyliion and Li Auto. Industry watchers will keep a tab on commercial vehicle registrations for the month of January, which is to be released by the European Automobile Manufacturers Association this week.

Most of the stocks in this report are flying under Wall Street radar, which provides a great opportunity to get in on the ground floor. Today, See These 5 Potential Home Runs >>