Notably, the deal is expected to close in the March quarter of 2021. The pipeline serves the markets in the Chicago area, where demand for the commodity is high. Moreover, the 9,100-mile pipeline system ships natural gas to large LNG export units along the U.S. Gulf Coast. NGPL has more than 1 million compression horsepower. Also, it owns natural gas storage of 288 billion cubic feet.

Importantly, Kinder Morgan reported strong fourth-quarter 2020 earnings aided by huge contributions from NGPL and Texas Intrastate systems. The divestment is significant for the company as it brings ArcLight on as another partner in the project, which reduces risk and will provide proceeds that can be further used in growth projects. In 2021, the leading North American energy infrastructure company is expected to invest $800 million in expansion projects and as contribution to joint ventures.

Kinder Morgan’s shares have increased 6.5% over the past six months compared with 9.8% rise of the industry it belongs to. 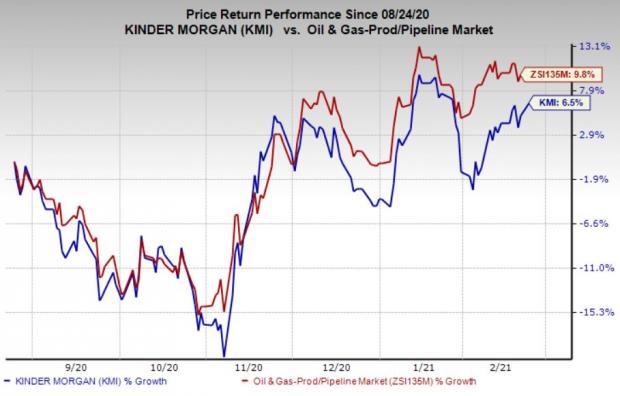 ConocoPhillips’ sales for 2021 are expected to increase 258.8% year over year.

Altus Midstream’s bottom line for 2021 is expected to increase 380.5% year over year.

Goodyear (GT) to Acquire Cooper for $2.5B, Boost Product Offerings