Goodyear (GT) to Acquire Cooper for $2.5B, Boost Product Offerings

Goodyear plans to finance the cash portion of the transaction through debt financing and has obtained a committed bridge financing facility headed by JPMorgan Chase Bank in North America.

The merged entity will be based in Goodyear’s home of Akron, OH. Cooper’s current headquarters is in Findlay, OH, where the combined company will continue to hold a presence.

Win-Win Deal for Both Goodyear and Cooper

This is a transformational deal which marks the collaboration of two of the biggest American tire companies.

The transaction will fortify Goodyear’s product offering by combining the portfolios of the two complementary brands, thus providing a more comprehensive offering across the value spectrum. It will also create a stronger and industry-leading U.S.-based tire manufacturer having a more enhanced presence in distribution and retail channels.

The merged entity will bank on Goodyear’s dominance in original equipment and premium replacement tires, and combine it with Cooper’s forte in the light truck and SUV segments, thus providing a more complete offering to customers.

The deal will nearly double Goodyear’s presence in China. At the same time, Cooper will get access to Goodyear’s 2,500 retail locations. Moreover, by integrating, the new company anticipates to save roughly $165 million within two years of closing of the transaction and free up cash in tax savings.

Furthermore, the transaction is likely to gradually boost Goodyear’s earnings per share, thus solidifying the company’s balance-sheet position and enhancing its ability to reduce leverage in its capital structure.

The acquisition will also bring an array of tire brands together under a single roof, including Goodyear’s Dunlop and Kelly brands, and Cooper’s Mastercraft and Mickey Thompson brands. Apart from this, the combined company will offer tire products and a broad range of services through Goodyear’s existing relationships with original equipment manufacturers, autonomous driving system developers, fleet operators and other mobility platforms.

Both Goodyear and Cooper, peers of which include Bridgestone Corp. (BRDCY - Free Report) and Michelin (MGDDY - Free Report) , currently carry a Zacks Rank of 3 (Hold). You can see the complete list of today’s Zacks #1 Rank (Strong Buy) stocks here.

Notably, shares of Goodyear and Cooper have appreciated 57.6% and 101.6%, respectively, in the past year. 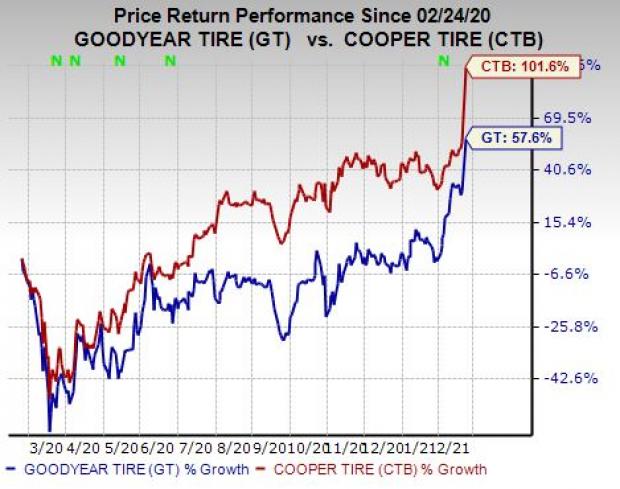