Clovis Oncology (CLVS - Free Report) incurred loss of $1.02 per share for the fourth quarter of 2020, wider than the Zacks Consensus Estimate of a loss of 76 cents but narrower than the year-ago loss of $1.81 per share.

Net revenues, entirely from Clovis’ only marketed drug, Rubraca, were up almost 10.2% year over year to $43.3 million in the quarter, slightly beating the Zacks Consensus Estimate of $43.16 million.

Shares of Clovis were down almost 6.1% in pre-market trading, following the dismal earnings performance. The stock has plunged 32.7% in the past year compared with the industry’s decrease of 11.4%. 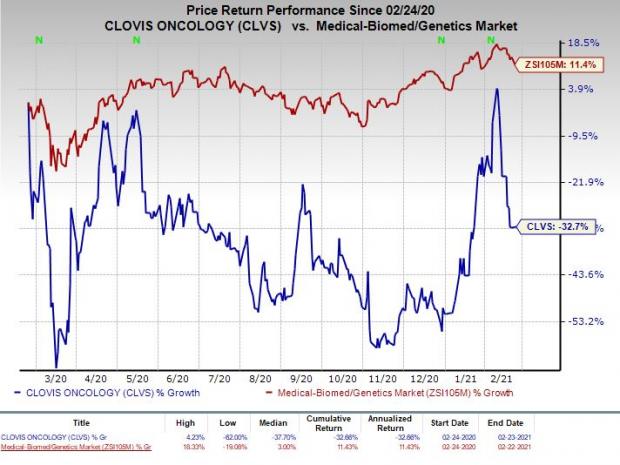 Clovis ended the quarter with $240.2 million of cash equivalents and available-for-sale securities compared with $224.7 million as of Sep 30, 2020.

The company expects its cash resources, along with anticipated revenues and available financing sources, to be enough to support its operations in early 2023.

In December, Clovis announced that the phase III confirmatory study — ARIEL 4 — evaluating Rubraca met its primary endpoint of improved investigator-assessed progression-free survival. The study was a post-marketing commitment in the United States and Europe

The company has a collaboration with Bristol-Myers (BMY - Free Report) to develop Rubraca and pipeline candidate, lucitanib, in combination with the latter’s PD-L1 inhibitor, Opdivo, for several cancer indications. The phase III ATHENA study is evaluating Rubraca plus Opdivo as first-line maintenance treatment in advanced ovarian cancer. Top-line data is expected in the second half of 2021. Interim data from phase II part of LIO-1 study evaluating lucitanib in combination with Opdivo as potential treatment for gynecologic cancers is expected later this year at medical meetings.

A phase II LODESTAR study is evaluating Rubraca in patients with recurrent solid tumors associated with the deleterious homologous recombination repair or HRR gene mutations. Data from the study may be used to file a regulatory application by the end of 2021 or first-half 2022, seeking approval for Rubraca in HRR patients.

The company plans to initiate a phase I/II study in the first half of 2021 to evaluate its peptide-targeted radionuclide therapy and imaging agent candidate, FAP-2286, in multiple tumor types.

Lexicon’s loss per share estimates narrowed from 66 cents to 17 cents for 2021 in the past 60 days. The company delivered an earnings surprise of 21.72%, on average, in the last four quarters. The stock has risen 170.8% in the past year.

What's in Store for Mariott Vacations (VAC) in Q4 Earnings?