All three major U.S. indexes fell on Tuesday, before recovering later in the day, with the Nasdaq suffering the biggest decline, down over 2% through morning trading. The S&P 500’s slip came after it fell for the fifth trading session in a row on Monday, marking its longest losing streak since last February.

Wall Street has been pulling profits out of nearly every name in technology from Apple (AAPL - Free Report) and Microsoft (MSFT - Free Report) to pandemic standouts like Tesla (TSLA - Free Report) and Zoom Video ZM. The fall coincides with a quick rebound in U.S. Treasury yields that highlighted the tech sector’s somewhat stretched valuations.

The rise in yields comes as Wall Street bets on the possibility of more government spending and a major economic rebound by the summer, as the coronavirus vaccine is distributed.

That said, the Nasdaq did pare its early morning losses after Fed Chairman Jerome Powell spoke and reaffirmed the central bank’s commitment to easy-money policies to bolster the economy. Despite its recent climb, the 10-year U.S. Treasury is yielding 1.35%, which is still well below December 2019’s 1.9% and extremely low by historical standards.

Things can change quickly in the market, given that the S&P 500 and the Nasdaq hit records on February 12. But the recent selloff—which pushed the tech-heavy index around 6% off its recent highs—might be nothing more than profiting taking. These pullbacks are essential aspects of healthy markets and might end up being a blip on the radar given the bullish fundamental setup for the rest of 2021(also read: Earnings Start Growing Again).

Nonetheless, investors might want to add a few large cap names outside of the tech world that also provide income through solid dividend yields…

Away-from-home venues such as restaurants, movie theaters, and stadiums make up a large chunk of Coca-Cola’s business. This caused its sales to tumble roughly 30% in Q2 FY20. Yet, KO’s sales trended in the right direction in the second-half of 2020, with Q4 revenue down just 5%. More importantly, the economy is bouncing back and people are slowly returning closer to their normal lives, which is good news for KO.

KO’s coronavirus struggles did see it ramp up its restructuring efforts. Coca-Cola is reducing its workforce, while also cutting smaller, underperforming brands. Plus, KO is revamping its portfolio amid changing consumer habits.

Zacks estimates call for KO’s Q1 revenue to dip around 1%, before it starts to make a big comeback that’s driven by easy-to-compare periods and hopefully a return to growth in its out-of-home space. KO’s revenue is projected to jump 11.3% in fiscal 2021 to reach $36.7 billion, with FY22 projected to climb another 5%. The beverage giant’s adjusted earnings are expected to climb by over 8% both this year and next.

Despite its improved outlook, KO remains far below its pre-pandemic levels and its stock is down over 4% in the last month to lag the consumer staples market. The stock currently hovers at around $51 a share, which puts it around 13% below its February 2020 records. This could give it plenty of room to climb and makes it a possible vaccine recovery play.

Coca-Cola trades near its year-long median in terms of forward earnings and at a slight premium against its peer group that includes PepsiCo (PEP - Free Report) , Keurig Dr Pepper (KDP - Free Report) , and others, as it has for the last several years. In keeping with today’s theme, Coca-Cola announced on Feb. 18 its 59th consecutive annual dividend increase, with its new quarterly dividend up 2.5% to $0.42 a share—it’s payable on April 1 to shareowners of record as of March 15.

Wall Street has been somewhat cautious about AbbVie as patent protections run out for one of the world’s top-selling drugs, Humira. Biosimilars are already available outside of the U.S., with domestic competition set to start in 2023. This pushed AbbVie to complete its $63 billion acquisition of Allergan in May 2020. The Allergan deal added Botox and other popular drugs to AbbVie’s portfolio that includes immunology, oncology, neuroscience, and more. ABBV also boasts a strong R&D pipeline.

With this in mind, the company beat our Q4 estimates in early February, with its FY20 revenue up 38%, driven in large part by its Allergan deal. Luckily, ABBV executives expect to post “impressive growth again in 2021.” Zacks estimates call for its FY21 revenue jump another 22%, with FY22 projected to climb 7% higher to $60 billion. The pharmaceutical power’s adjusted EPS figures are projected to climb 18% and 11%, respectively during this stretch.

AbbVie’s overall EPS outlook improved since its fourth quarter release. The company has also continually raised its dividend and its 4.9% yield blows away its industry’s 2.3% average, as well as Eli Lilly’s (LLY - Free Report) 1.7%, and 30-year U.S. Treasury’s 2.1%. ABBV currently lands a Zacks Rank #3 (Hold), alongside a “B” grade for Growth and an “A” for Value in our Style Scores system.

In fact, AbbVie’s valuation and dividend attracted Warren Buffett and Berkshire Hathaway’s attention last year. ABBV shares are up 14% in the last year to easily beat its peer group’s slight decline. Yet it trades 6% off its January highs and around 9% below its 2018 records. The stock also trades at a big discount to its industry at 8.5X forward 12-month earnings vs. 14.1X. 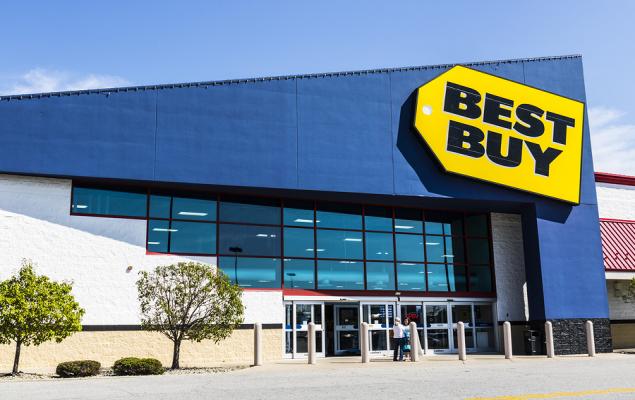