Halozyme Therapeutics, Inc. (HALO - Free Report) reported fourth-quarter 2020 earnings of 50 cents per share, which missed the Zacks Consensus Estimate of 56 cents. The company had reported a loss of 17 cents in the year-ago quarter.

Royalty revenues were $32 million in the fourth quarter, up 85.7% from the year-ago quarter, mainly driven by strong sales uptake of J&J’s subcutaneous Darzalex (Darzalex SC) and Roche’s (RHHBY - Free Report) Phesgo. However, royalties were hurt by lower sales of its mature legacy partner product.

Product sales, solely from the sale of bulk rHuPH20 to collaborators using the ENHANZE platform for drug development, increased 43% to $32.5 million in the fourth quarter. The increase was driven by strong demand for rHuPH20 from partners to support their commercial as well as under developing products.

Revenues under collaborative agreements were $57.3 million compared with $13.7 million in the prior-year quarter. The significant increase was due to the company’s recognition of $30 million in upfront payment from Horizon Therapeutics and $15 million in sales milestone from Janssen, a subsidiary of J&J. Halozyme inked an agreement with Horizon Therapeutics granting access to its ENHANZE platform during the quarter. Janssen’s payment was triggered following first commercial sale of Darzalex Faspro.

Research and development (R&D) expenses declined 83.6% year over year to $7.4 million mainly due to discontinuation of oncology drug development efforts.

Selling, general and administrative (SG&A) expenses were $10.4 million, down 56.4% from the year-ago period. The decline was due to lower compensation and commercial-related expenses as a result of a restructuring initiatives announced last year.

The company repurchased its own common stock worth $150 million during the fourth quarter.

Two late-stage studies were initiated by argenx in January and February. Janssen received accelerated approval from the FDA for a combination regimen of Darzalex Faspro for the treatment of adult patients with newly diagnosed light chain ("AL") amyloidosis in the last month. Regulatory applications for subcutaneous formulation of Darzalex was submitted by Janssen to the FDA and the European Medicine Agency in November last year seeking approval as treatment for relapsed or refractory multiple myeloma in second or later-line settings.

Halozyme issued its guidance for revenues and earnings for 2021. The company expects total revenues in 2021 to be between $375 million and $395 million, indicating year-over-year growth of 40%-48%. The company expects revenues from royalties to double year over year on the back of strong uptake of subcutaneous formulation of J&J’s Darzalex.

The Zacks Consensus Estimates for revenues and earnings for 2021 stands at $405.49 million and $1.62 per share, respectively. This suggests that the company’s guidance for both earnings and revenues are below market expectations.

Shares of Halozyme were down 5.7% in after-market trading on Feb 23, following the earnings miss and dismal 2021 guidance. However, the stock has gained 144.3% in the past year compared with the industry’s 11.4% increase. 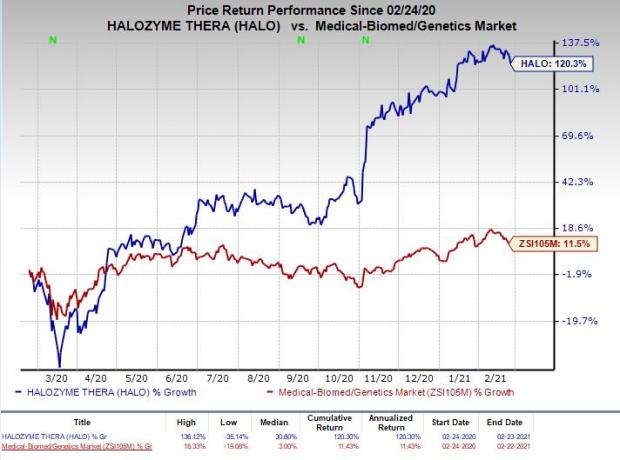