The company’s energy professionals will be responsible for providing advanced solutions to help expand the distribution of adequate sustainable energy apart from upgrading utility services and encouraging the utilization of renewable energy resources. The company will also facilitate the integration of smart grid technologies that would ultimately improve the availability of renewable energy solutions in the country.

Notably, this contract is built on long-term collaboration between Tetra Tech and the USAID in renewable energy programs in Indonesia.

The company clinched multiple government contracts in the past several months that have significantly boosted its top line. In January 2021, it secured a five-year, single-award deal worth $25 million from USAID to work on enhancing the consumption of renewable energy and reducing deforestation in Zambia. In December 2020, the company clinched a $185-million multiple-award contract from the U.S. Army Corps of Engineers to offer advanced solutions for U.S. federal government environmental programs. In November 2020, it secured a $150-million multiple-award contract from the U.S. Naval Facilities Engineering Command for providing architect and engineering services.

The Zacks Rank #2 (Buy) company’s shares have gained 13.2% compared with 12.5% growth recorded by the industry in the past three months. 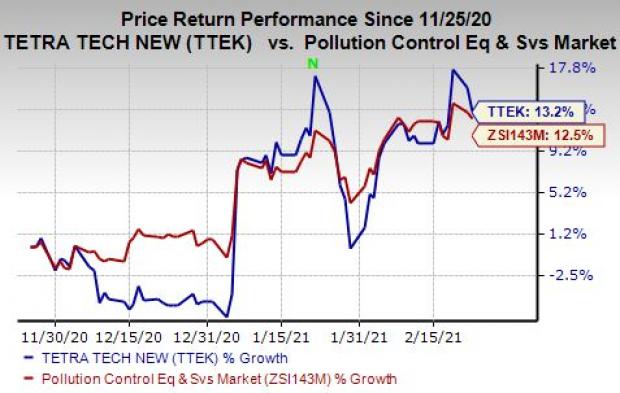 EnPro delivered an earnings surprise of 279.71%, on average, in the trailing four quarters.

Graco delivered an earnings surprise of 20.87%, on average, in the trailing four quarters.

Donaldson delivered an earnings surprise of 14.57%, on average, in the trailing four quarters.