In the past week, the aviation space was full of updates regarding the emergency landing made by United Airlines’ (UAL - Free Report) Flight 328 (plying a Boeing 777 jet) at the Denver International Airport following an engine failure. Delta Air Lines (DAL - Free Report) was also in news for a similar incident.

1. On Feb 20, 231 passengers and 10 crew members aboard United Airlines’ Flight 328 survived a scare when the plane had to make an emergency landing at the Denver International Airport after its right engine, made by Pratt & Whitney, failed. Following the explosion of the engine, debris rained on Denver suburbs. This unfortunate incident occurred just after the take-off. Notably, the plane was supposed to go to Honolulu. However, the only good news was that no one sustained injuries and landed safely. Soon after the fiasco, management at the presently Zacks Rank #4 (Sell) United Airlines announced that it was "voluntarily & temporarily" withdrawing from service the 24 Boeing 777 jets in its fleet.

2. Per a Reuters report, Delta made an emergency landing at the Salt Lake International Airport on Feb 22 after a snag in the engine was detected. Flight DL2123, en route to Seattle, WA from Atlanta, GA was operating on a Boeing 757-200 aircraft. A Delta spokeswoman reportedly stated that the plane diverted “out of an abundance of caution following an indicator warning of a possible problem with one of its engines”. She further added that “the flight landed safely without incident and taxied to the gate without assistance” and that Delta was working to re-accommodate customers on another flight.

Notably, an update on the alliance was also mentioned in the previous week’s writeup when JetBlue pilots turned down a tentative deal pertaining to the implementation of the agreement with American Airlines.

4. In an expansion update, Spirit Airlines announced that it will add a destination (Louisville) to its network. To this end, the carrier aims to start operating flights from the Louisville Muhammad Ali International Airport to Fort Lauderdale, Orlando, Las Vegas and Los Angeles. The above nonstop flight services will be effective May 27 on a daily basis. 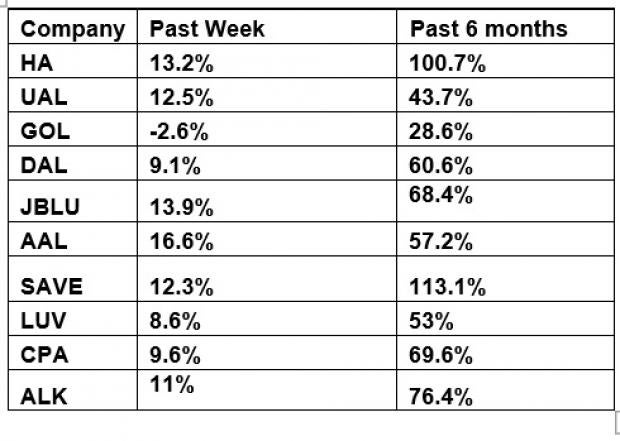 The table above shows that all airline stocks, barring Gol Linhas (GOL - Free Report) , have traded in the green over the past week. Evidently, the NYSE ARCA Airline Index has rallied 9.6% over the past week to $106.04. Over the course of six months, the sector tracker has surged 80.2%