Exxon Mobil Corporation (XOM - Free Report) recently agreed to divest a chunk of upstream assets in U.K. central and northern North Sea region to NEO Energy, an affiliate of HitecVision. The non-operated assets are expected to fetch more than $1 billion, in addition to $300 million in contingent payments, depending on a potential rise in commodity prices.

The deal includes the energy behemoth’s stakes in 14 running fields in the U.K. North Sea region. The assets are operated by Royal Dutch Shell plc (RDS.A - Free Report) and TOTAL SE (TOT - Free Report) . Major projects like Shearwater and Starling are included in the deal. In 2019, ExxonMobil’s output share from the fields were recorded at 38,000 barrels of oil equivalent per day (Boe/d).

The company plans to retain non-operated stakes in southern North Sea upstream resources. It will also hold interests in SEGAL pipeline infrastructure that serves the Fife ethylene plant. The company is expected to maintain the massive refining, chemical and natural gas selling operations in the country, where it has been operating for more than 135 years. The deal with HitecVision is expected to close by mid-2021.

The move is part of ExxonMobil’s plan of getting rid of less strategic assets and freeing up capital to focus more on more profitable resources like those in Guyana, Brazil and the Permian Basin in the United States. Importantly, the company announced in a regulatory filing that it had proved reserves of 15.2 billion Boe at 2020-end, reflecting a 32.3% decrease from the year-ago figure of 22.4 billion Boe. The deal is likely to further decrease the company’s reserves.

Markedly, most of the decline in 2020 reserves was attributed to its Canadian oil-sands developments, per Bloomberg. The coronavirus pandemic hurt global energy demand, owing to which, the company reported the first annual loss in decades and made downward revisions of reserves.

ExxonMobil has gained 41.7% in the past six months compared with 26.5% rise of the industry it belongs to. 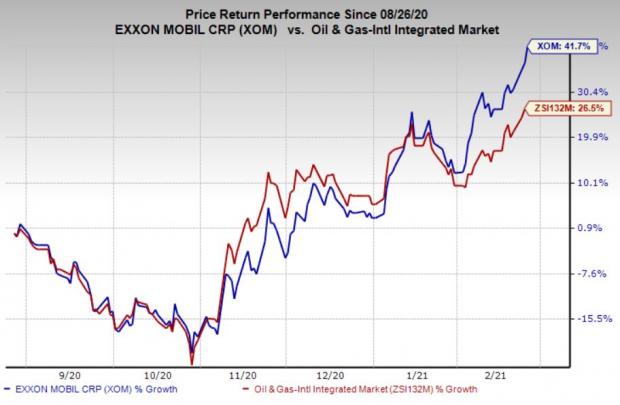 ConocoPhillips’ sales for 2021 are expected to increase 54% year over year.