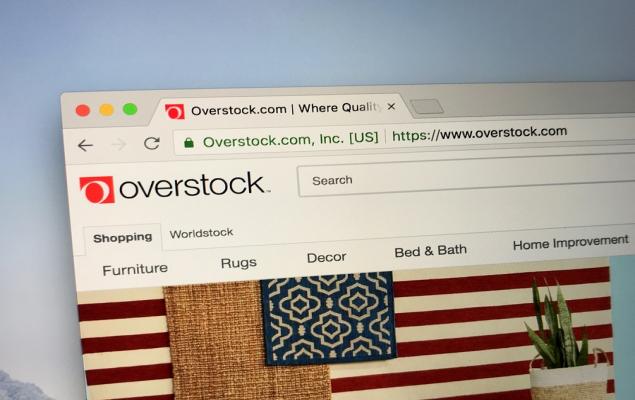 Overstock.com (OSTK - Free Report) reported fourth-quarter 2020 earnings of 26 cents per share that missed the Zacks Consensus Estimate by 13.3%. Notably, the company had reported loss of 73 cents in the year-ago quarter.

Markedly, growth in new customers was 94% year over year in the quarter under review. Moreover, new-customer repeat-purchase rate increased more than 6%.

Additionally, orders placed on a mobile device were 50% of gross merchandise sales in the fourth quarter of 2020, up 630 basis points (bps) year over year.

tZERO revenues soared 98.6% year over year to $11.7 million. MVI revenues were $2.4 million compared with the year-ago quarter’s revenues of $0.8 million.

General & administrative (G&A) expenses were unchanged year over year at $33.2 million. As a percentage of revenues, G&A decreased 410 bps on a year-over-year basis to 4.9%.

Operating income was $9.8 million against the year-ago quarter’s operating loss of $31.6 million.

On Jan 25, 2021, Overstock.com entered into a partnership with Pelion Venture Partners, a third-party venture capital firm, to oversee Medici Ventures’ blockchain assets. Per the agreement, MediciVentures, Overstock.com’s wholly owned blockchain-focused subsidiary, will be converted to a limited partnership (the Fund), which will have an eight-year life and a total capital commitment of $45 million.

Overstock.com will be a limited partner in the Fund while Pelion will act as general partner. The Fund will return invested capital to Overstock.com first and then split profits on successful exits as outlined in its Limited Partnership Agreement.

Abercrombie & Fitch, DICK’s Sporting Goods and JD.com are set to report their quarterly earnings on Mar 2, 9 and 11, respectively.