Total revenues improved 2.2% from the year-ago quarter’s level to $502.7 million. Moreover, the top line surpassed the Zacks Consensus Estimate by 4.63%.

Year-over-year improvement in revenues can be attributed to growth in subscription services, led by momentum in Pure as-a-Service, Cloud Block Store, and Evergreen offerings. However, decline in Product revenues limited growth.

Following the results, shares of Pure Storage were up more than 3.5% in the pre-market trading on Feb 25. 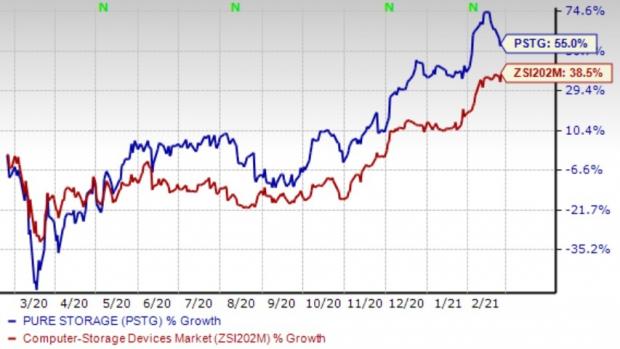 Notably, the stock has gained 55% in the past year, compared with the industry’s rally of 38.5%.

In the fiscal fourth quarter, Product revenues (contributed 70% to total revenues) amounted to $350.4 million, reflecting a decline of 6.9% on a year-over-year basis.

Management noted that total revenues both in the United States and International saw slight growth compared to a strong fiscal fourth quarter.

The company is also poised to gain from uptick in its latest offering, Pure FlashRecover, which provides all-flash data backup and recovery in case of a ransomware attack. Also, solid pipeline and synergies from Portworx acquisition, which strengthened capabilities for containerized and cloud-native applications, favored performance.

Management noted strength in FlashBlade and FlashArray business segments primarily courtesy of existing customers and continued expansion of enterprise customer base. During the reported quarter, Pure Storage added more than 471 customers, bringing the total count to more than 8,800 organizations.

The company closed several deals above $10 million and accomplished record sales during the reported quarter to Fortune 500 customers.

Non-GAAP Subscription gross margin came in at 70.2%, which expanded 210 bps on a year-over-year basis.

Non-GAAP operating expenses as a percentage of total revenues, came in at 62.1%, which expanded 240 bps on a year-over-year basis.

Pure Storage reported a non-GAAP operating income of $36.7 million in the fiscal fourth quarter, down 39.7% from the prior-year quarter. Non-GAAP operating margin contracted 510 bps year over year to 7.3%.

During the fiscal fourth quarter, the company returned $23.6 million to shareholders via share repurchases of over 1 million shares completing the planned share repurchase authorization of $150 million.

On Feb 24, Pure Storage’s board of directors approved incremental share buybacks of up to an additional $200 million under its stock repurchase program.

Total deferred revenues in the fiscal fourth quarter were $843.7 million, compared with $763 million at the end of the prior quarter.

Remaining performance obligations (RPO) at the end of fiscal fourth quarter were $1.1 billion, up 24% on a year-over-year basis. The metric represents total committed non-cancelable future revenues.

Moreover, the company estimates fiscal 2022 revenues to improve 14-15% on a year-over-year basis. The Zacks Consensus Estimate stands at $1.92 billion indicating year-over-year growth of 15.3%.