JPMorgan (JPM - Free Report) has signed an agreement with Banco Bilbao Vizcaya Argentaria, S.A. (BBVA - Free Report) , wherein it will refer its Mexico private banking business clients to the latter’s local unit in Mexico. This comes as the U.S. bank plans on shutting its private banking division in Mexico and thus discontinuing the wealth-management services it provides in the region.

Nevertheless, JPMorgan is expected to continue with investment banking, trading and treasury services in Mexico.

Also, the bank will continue to serve its Mexico clients through other platforms abroad.

Notably, according to people with knowledge of the matter, who asked not to be identified, most of the rich and ultra-rich families in some of the largest economies in Latin America are shifting their wealth to international financial capitals. This is a major reason for JPMorgan to shut its private banking operations in Latin America’s second-largest economy.

Notably, last year in September as well, JPMorgan entered an agreement with Banco Bradesco S.A. to transfer its private banking clients, as part of its efforts to exit the Brazil private banking business.

While, on one hand, JPMorgan is planning to exit private banking businesses in some parts, on the other it is working constantly to expand its footprint in new regions.

It aims to enter 15-20 new markets by the end of 2022 by opening roughly 400 branches. In fact, it has already made substantial progress on this front, having added nearly 170 branches so far and “expect to be in all contiguous 48 states by mid-2021.”

Over the past six months, shares of the company have gained 54.6% compared with 45% growth recorded by the industry. 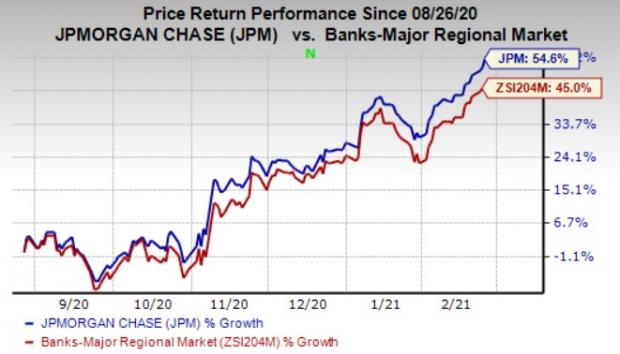