Adjusted earnings of $1.45 per share (excluded $6.75 from non-recurring items) missed the Zacks Consensus Estimate by 0.7% and declined 44.4% year over year. Total revenues of $399 million surpassed the consensus mark by 3.2% and declined 9.3% year over year. The downside was caused by lower average fuel prices and foreign exchange rates.

Notably, WEX’s shares have increased 7.7% in the past year against 6.1% growth of the industry it belongs to. 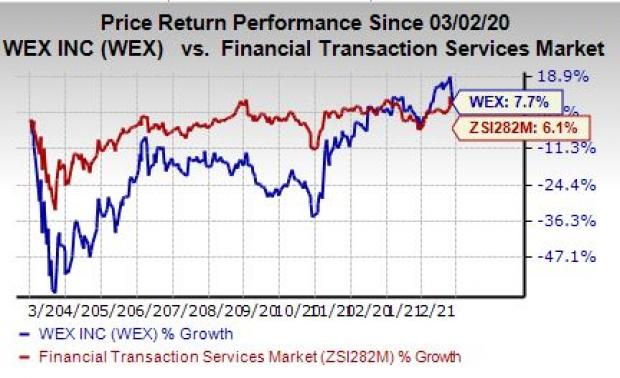 Fleet Solutions revenues (59% of total revenues) declined 9.7% year over year to $235.4 million. The downside was primarily due to 25% plunge in finance fee revenue.

Travel and Corporate Solutions revenues (18.7%) of $74.7 million were down 21.9% year over year. The downtick was caused by decline in revenues from travel-related customers. Purchase volume plunged 48% to $5 billion.

Health and Employee Benefit Solutions revenues (22.3%) of $88.9 million rose 6.3% year over year, on 13% growth in account servicing revenues and 4% growth in payment processing revenues. The average number of Software-as-a-Service (SaaS) accounts in the United States increased 8% year over year to 14.5 million.

WEX exited the quarter with cash and cash equivalents of $852 million compared with $1.5 billion witnessed at the end of the prior quarter. Long-term debt was $2.9 billion, flat sequentially.

Rollins’ (ROL - Free Report) fourth-quarter 2020 adjusted earnings of 13 cents per share came ahead of the consensus estimate as well as the year-ago quarter’s figure by 18.2%. Revenues of $536.3 million beat the consensus mark by 1.7% and increased 6% year over year.

IHS Markit’s (INFO - Free Report) fourth-quarter fiscal 2020 adjusted earnings per share of 72 cents beat the Zacks Consensus Estimate by 7.5% and increased 11% on a year-over-year basis. Total revenues came in at $1.11 billion, marginally missing the consensus mark and declining 1% from the year-ago quarter’s on a reported basis.

IBM's Red Hat OpenShift Platform to be Leveraged by Siemens