However, better-than-expected results failed to impress the market as there has not been any major price change since the earnings release on Feb 25.

In the past year, ICF’s shares have increased 7.5% compared to 12.6% growth of the industry it belongs to. 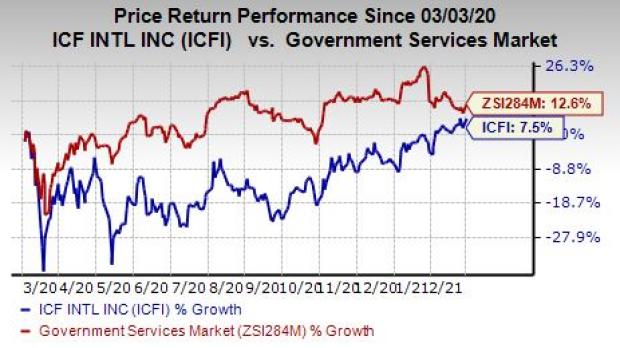 Non-GAAP earnings (excluding 69 cents from non-recurring items) of $1.36 per share surpassed the Zacks Consensus Estimate by 19.3% and increased 15.3% on a year-over-year basis. Moreover, revenues of $434.3 million surpassed the consensus mark by 9% and increased 9.5% year over year owing to increase in service revenues.

Total backlog and funded backlog amounted to $2.9 billion and $1.5 billion at the end of the fourth quarter, respectively. The total value of contracts awarded in the quarter came in at $525 million.

The company generated $78 million of cash from operating activities and capex was $4.7 million. ICF paid out dividends of $2.6 million in the reported quarter.

ICF announced a quarterly cash dividend of 14 cents per share, payable to its shareholders on Apr 13, 2021 as of record date Mar 26.

Revenues are projected in the range of $1.52-$1.57 billion, while the Zacks Consensus Estimate is pegged at $1.58 billion.

EBITDA is expected to be in the range of $145 million and $155 million. Operating cash flow is anticipated to be approximately $100 million.

Rollins’ (ROL - Free Report) fourth-quarter 2020 adjusted earnings of 13 cents per share came ahead of the consensus estimate as well as the year-ago quarter’s figure by 18.2%. Revenues of $536.3 million beat the consensus mark by 1.7% and rose 6% year over year.

IHS Markit’s (INFO - Free Report) fourth-quarter fiscal 2020 adjusted earnings per share of 72 cents beat the Zacks Consensus Estimate by 7.5% and increased 11% on a year-over-year basis. Total revenues came in at $1.11 billion, marginally missing the consensus mark and declining 1% from the year-ago quarter’s on a reported basis.