TC Energy (TRP) Gets Approval to Acquire TC Pipelines for $1.68B

TC Energy Corporation (TRP - Free Report) has been granted the approval for the previously announced acquisition of TC PipeLines, LP from the latter’s unitholders in a $1.68-billion all-stock deal.

Per the agreement, a fully-owned subsidiary of TC Energy will acquire all the outstanding common units of TC PipeLines not beneficially owned by itself or its affiliates in return for TC Energy common shares. Notably, the transaction is likely to become effective on Mar 3.

TC PipeLines is a publicly-traded master limited partnership (“MLP”) that owns, operates, develops and acquires pipelines and other midstream assets. Currently, TC Energy holds a 23.96% ownership in the master limited partnership, which is managed by its general partner, TC PipeLines GP, Inc., which is its subsidiary. Notably, about 70% of TC PipeLines unitholders voted in favor of the merger agreement. The strategic move will provide TC PipeLines unitholders with 0.70 common shares of TC Energy for each unit held.

Earlier, TC Energy put in a $1.48-billion offer to acquire the outstanding shares of TC PipeLines, which TC Energy does not already own, in an effort to put the MLP fully under the authority of TC Energy. In December, it raised its offer to $1.68 billion due to investors' allegations that the offer, which was already an increase from the previous bid, was insufficient. However, TC Energy mentioned that it would not lift the bid price any further than it already had.

Following the deal completion, TC Energy will fully own TC PipeLines and the latter will no longer be a publicly-held master limited partnership. Both companies announced that all conditions required to complete the agreement have been satisfied and all necessary filings have been conducted for the transaction to be effective on the scheduled date.

Its shares have underperformed the industry in the past six months. The energy company’s stock has declined 8.5% against the industry’s 14.6% growth. 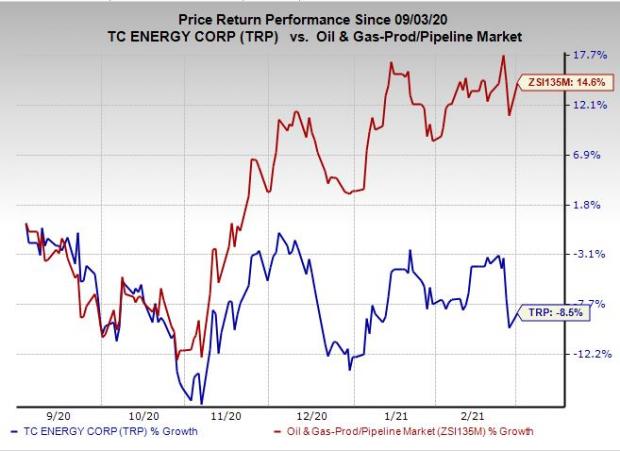 Exxon’s earnings for 2021 are expected to increase 34% year over year.