Stericycle, Inc. SRCL reported mixed fourth-quarter 2020 results, with earnings missing the Zacks Consensus Estimate and revenues surpassing the same. In line with discouraging bottom-line results, shares of the company have plunged marginally since the earnings release.

Adjusted earnings (excluding 6 cents from non-recurring items) per share of 59 cents missed the Zacks Consensus Estimate by 7.8% and declined 18.1% year over year. Earnings fell due to an unfavorable impact of 5 cents from divestitures and foreign-exchange rates, 6 cents from lower income from operations and 8 cents from higher adjusted tax rate.  These were partially offset by a benefit of 6 cents from lower interest expenses.

However, revenues of $655.9 million surpassed the consensus mark by 1.5% and declined 18% year over year. The downfall was due to divestitures that hurt revenues by $133.7 million and lower Secure Information Destruction that impacted revenues by $30.9 million. Revenues dropped 1.8% on an organic basis due to the COVID-19 pandemic.

Notably, Stericycle’s shares have inched up 1% in the past year against 17.5% decline of the industry it belongs to. 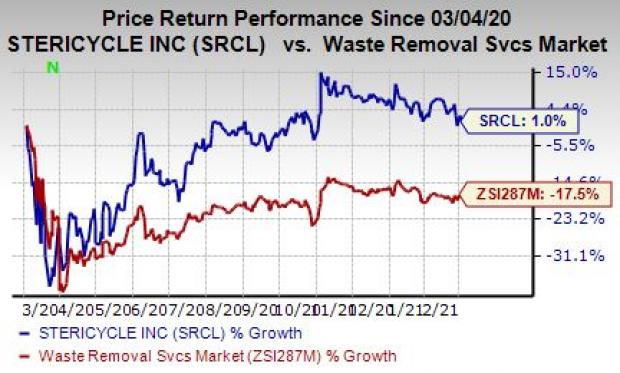 Regulated Waste and Compliance Services revenues fell 19.5% year over year on a reported basis but increased 3.2% on an organic basis to $439.8 million. The segment contributed 67.1% to total revenues.

Secure Information Destruction revenues declined 14% year over year on a reported basis and 14.2% organically to $187.4 million. The segment contributed 28.6% to total revenues.

Communication and Related Services revenues fell 20.1% year over year on a reported basis and 1.7% organically to $28.7 million. The segment contributed 4.4% to total revenues.

Revenues from North America were $526.2 million, down 20.7% year over year on a reported basis and 3% organically. The region contributed 80.2% to total revenues.

International revenues of $129.7 million fell 4.8% year over year on a reported basis and increased 4.3% organically. The region contributed 19.7% to total revenues.

Rollins’ (ROL - Free Report) fourth-quarter 2020 adjusted earnings of 13 cents per share came ahead of the consensus estimate as well as the year-ago quarter’s figure by 18.2%. Revenues of $536.3 million beat the consensus mark by 1.7% and rose 6% year over year.

IHS Markit’s INFO fourth-quarter fiscal 2020 adjusted earnings per share (EPS) of 72 cents beat the Zacks Consensus Estimate by 7.5% and increased 11% on a year-over-year basis. Total revenues came in at $1.11 billion, marginally missing the consensus mark and declining 1% from the year-ago quarter’s figure on a reported basis.