The Volvo Group has secured 50% partnership interests in the German auto giant’s arm, Daimler Truck Fuel Cell GmbH & Co. KG for 0.6 billion euros on a cash and debt-free basis. The Volvo Group and Daimler Truck will own equal interests in the new entity. Nonetheless, both companies will continue to compete in all other areas, such as vehicle technology and fuel-cell integration in trucks.

The new entity has been formed with the goal to make it a leading global manufacturer of fuel-cells, thus taking a massive step toward becoming climate-neutral and providing sustainable and green transportation solutions by 2050.

The key goal of the joint venture will to develop and commercialize fuel-cell systems for use in heavy-duty big-rigs as well as other applications. Daimler Truck and the Volvo Group have set a target to commence customer tests of trucks integrated with fuel-cells in about three years and initiate production during the second half of this decade.

Daimler AG, with its businesses Mercedes-Benz Cars, Daimler Trucks, Daimler Financial Services, Mercedes-Benz Vans and Daimler Buses, is globally a leading producer of premium passenger cars and one of the largest manufacturers of commercial vehicles in the world.

Amid the heightening concerns on global warming and air pollution, it has become imperative for automakers to provide clean transportation solutions. Thus, battery-electric and fuel-cell electric vehicles, along with other renewable fuels to some extent, are the future of transportation.

Amid this transforming scenario, Daimler Truck and the Volvo Group are banking upon the use of hydrogen-based fuel-cell as a key technology for enabling zero emissions transportation in the future. Both companies are fully committed to the Paris Climate Agreement for decarbonizing road transportation. The newly entity will aid the companies in their quest to shape a world with clean transportation. The joint venture will build a similar position in fuel-cells that the Volvo Group and Daimler Truck have in commercial vehicles.

Notably, shares of the company have appreciated 27.9% year to date, while its industry has rallied 17.8%. 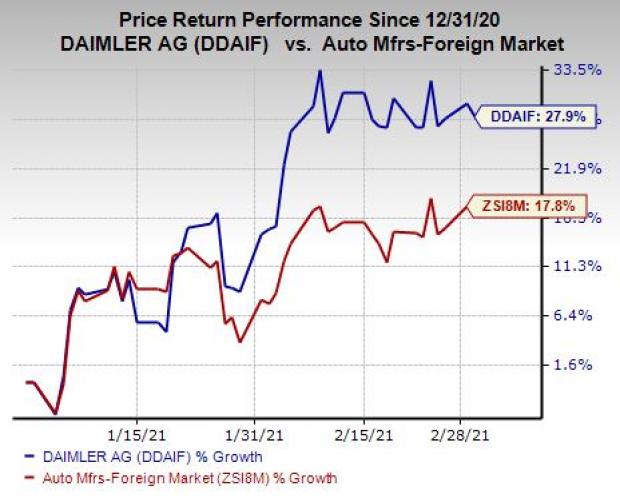 What's in the Cards for Opendoor Technologies' (OPEN) Q4 Earnings?