Earnings per share of 45 cents declined 5% year over year but surpassed the Zacks Consensus Estimate of 43 cents. Lower-than-expected earnings can be attributed to higher costs and margins, which offset top-line growth.

Net sales of $911 million beat the Zacks Consensus Estimate of $906.5 million and improved 1% year over year on a reported basis. On an underlying basis, net sales remained flat with the prior-year quarter. In the first nine months of fiscal 2021, reported sales were flat, while underlying sales improved 2%. The top line benefited from strong volume growth, offset by a decline in price/mix.

The company reported volume growth of 11% in the first nine months of fiscal 2021, aided by New Mix and Jack Daniel’s RTDs. Price/mix dropped 9% due to unfavorable portfolio mix shift, with gains from lower-priced brands (like New Mix & Jack Daniel’s RTDs) and the unfavorable channel mix due to the pandemic-led restrictions on the on-premise channel across several developed markets globally.

Given the unpredictable nature of the COVID-19 pandemic, the company did not provide any guidance for fiscal 2021.

Overall, the Zacks Rank #3 (Hold) company’s shares have declined 9.6% in the past three months compared with the industry’s fall of 7.5%. 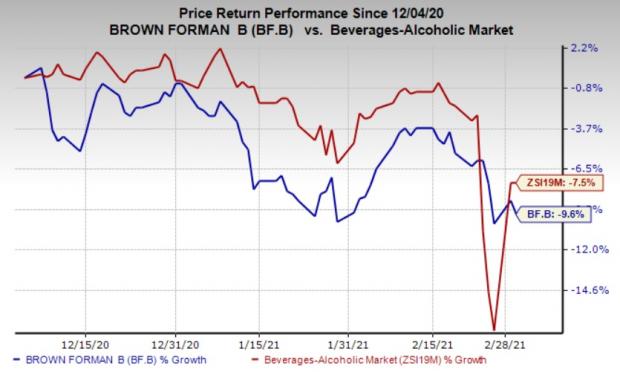 Growth in the United States was driven by strong demand for Jack Daniel’s RTDs, Jack Daniel’s Tennessee Honey and Gentleman Jack. Additionally, the company witnessed strong volumetric gains for premium bourbons, including Woodford Reserve and Old Forester. Moreover, it witnessed strong underlying sales growth for Herradura and el Jimador in the United States. This was partly offset by declines in Jack Daniel’s Tennessee Whiskey, reflecting an unfavorable channel mix due to restrictions in the on-premise channel.

Meanwhile, the company’s emerging markets returned to growth in the fiscal third quarter. The improvement was led by gains in China, Brazil and Poland. This was partly offset by declines in Southeast, India and several Latin America markets, owing to the pandemic-related disruptions.

In third-quarter fiscal 2021, Brown-Forman’s gross profit declined 1% year over year on both reported and underlying basis to $550 million, while gross margin contracted 150 basis points (bps) to 60.4%. The decline in gross margin can be attributed to higher input costs, lower fixed costs absorption, and unfavorable impacts from portfolio and channel mix shifts. The channel mix shift is mainly related to the pandemic-led restrictions in the on-premise channel, while the portfolio mix shift is attributed to the significant rise in sales of ready-to-drink products.

Selling, general and administrative (SG&A) expenses increased 3% year over year to $157 million on a reported basis. On an underlying basis, SG&A expenses were up 1% year over year.

Advertising expenses of $121 million accelerated 17% on a reported basis. On an underlying basis, advertising expenses increased 16% year over year. The increase in advertising investments can be attributed to the phasing of spending from the first half to the second half of fiscal 2021. The company expects advertising spending to accelerate significantly over the balance of the fiscal year.

Operating income fell 8% to $281 million on both reported and underlying basis. Operating margin declined 290 bps to 30.9% in the fiscal third quarter. The decline in operating income was driven by gross margin contraction as well as operating expense deleverage.

The company declared a quarterly cash dividend of 17.95 cents per share on Class A and Class B shares.

Also, the board approved a $125-million capital investment plan to expand the bourbon-making capacity in Kentucky in response to the robust consumer demand.