Las Vegas Sands Corp. (LVS - Free Report) recently reached an agreement to divest its Las Vegas real property and operations for $6.25 billion. The company’s Las Vegas properties includes The Venetian Resort Las Vegas and the Sands Expo and Convention Center (collectively called "The Venetian"). However, the closing of the deal is subject to regulatory approval. Following the news, shares of Las Vegas gained 1.3% on Mar 3. In the past six months, shares of the company have gained 26.6%, compared with the industry’s rally of 45.8%.

Apollo Global Management, Inc.’s (APO - Free Report) affiliate-managed funds will acquire subsidiaries that hold the operating assets and liabilities of the Las Vegas business of the Venetian for $2.25 billion and VICI Properties will purchase the land and real estate assets of the Venetian for $4 billion.

Las Vegas Sands will have no property in Las Vegas expect for its headquarter, which is currently In Las Vegas. The company’s chairman and CEO Robert Goldstein said “There are also potential development opportunities domestically, where we believe significant capital investment will provide a substantial benefit to those jurisdictions while also producing very strong returns for the company.” 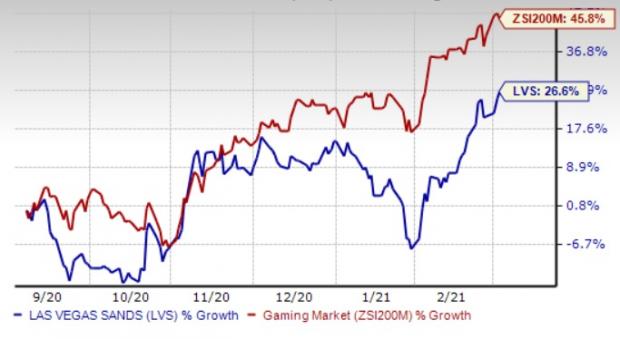 Following the sales of its Las Vegas properties, the company will focus on Asian markets. Las Vegas Sand’s financial position will strengthen significantly following the deal, which will provide the company with opportunities to invest in new development opportunities. It intends to reinvest in Asia, which remains the backbone of the company. Las Vegas Sand’s development in Singapore and Macau are currently major revenue churners. Case in point, Macau and Singapore accounted for 47.3% and 35%, respectively, of the company’s total revenues in 2020.

Las Vegas Sands has invested over $13 billion in Macao since 2004, consistently contributing to Macao's diversification and appeal as a business and leisure tourism destination. Despite the current scenario, the company previously informed that it will progress with its $2.2 billion investment in Macao. As of fourth-quarter 2020, total investment in Macao stands at more than $15 billion. Management believes that investment will strengthen its position in Macao. Moreover, Las Vegas Sands is quite confident about growth opportunity in Singapore, which is one of the top spots for gambling.

Patrick Dumont, the company's president and chief operating officer said “Our long-held strategy of reinvesting in our Asian operations and returning capital to our shareholders will be enhanced through this transaction.”

Shares of Corsair Gaming have gained 141.5% in the past six months.

Golden Entertainment 2021 earnings are likely to witness growth of 93.9%.