Stocks fell again Thursday amid a string of selling as U.S. Treasury yields climb. The downturn was driven by technology stocks and pushed the Nasdaq right near correction territory, down roughly 10% from its mid-February records.

The selling continued as Federal Reserve Chairman Jerome Powell once again committed to the central bank’s easy-money policies. Wall Street has beefed up its bond selling in anticipation of more government spending and the potential of a vaccine-boosted economic recovery later this year. The yield on the 10-year U.S. Treasury has soared from 1% in late January to over 1.5% on Thursday—its highest level in over a year.

Timing the market precisely is next to impossible. Think about all the money left on the table by not at least dollar-cost averaging into strong stocks as the market tumbled last March. Even though corrections are healthy aspects of the market, they are not super common, which is why many savvy Wall Street firms take advantage of them.

Therefore, investors with long-term horizons might want to consider buying strong stocks at a discount, even if the market faces more selling…

Nike has thrived in a fluid industry where it’s difficult to stay on top. The company’s ability to create trends, constantly adapt, and attach the Swoosh to the biggest sports, athletes, and cultural icons in the world will help it grow and compete against global rival Adidas, as well as Lululemon (LULU - Free Report) and other newer players. NKE remains one of the world’s most valuable brands alongside the likes of McDonald’s (MCD - Free Report) , Disney (DIS - Free Report) , and many of the tech giants.

The company has built a robust e-commerce business that includes various shopping apps and a massive reach across social media platforms such as Instagram where consumers can now shop directly. Nike’s transition to a higher-margin, direct-to-consumer model sets it up to thrive in the Amazon era.

NKE’s DTC push includes updating its stores for the 2020s and beyond, while focusing on key hubs for fashion from New York City to Paris. NKE is also digitalizing its supply chain to be more predictive.

This would mark a big comeback from FY20’s 4% decline and both estimates represent the strongest top-line growth since fiscal 2012. NKE’s adjusted earnings are projected to skyrocket 85% this year and another 29% next year. 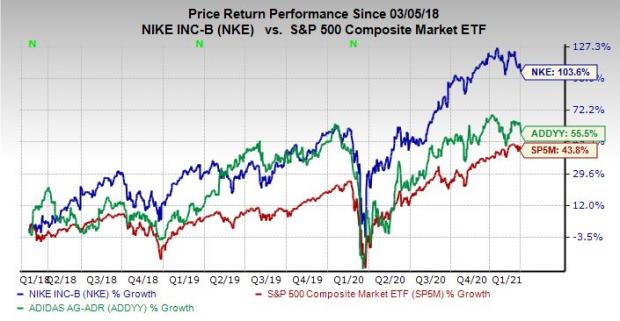 The sports apparel power’s stock has climbed nearly 50% in the last year to outpace its industry. NKE shares are up 100% to nearly triple its Econ Sector’s average and double the S&P 500 in the past three years. The stock has cooled down recently, underperforming the market in the past three months. At roughly $133 a share, NKE trades 10% below its early January records. And with an RSI of 36, Nike is approaching what is often considered oversold territory.

Wall Street has been willing to pay a premium for NKE for years compared to its industry. Luckily, it trades at a 20% discount to its own year-long highs in terms of forward sales and below its own median over this stretch. NKE lands a Zacks Rank #3 (Hold), alongside a “B” grade for Growth in our Style Scores system and its dividend yields 0.80% right now.

The next catalyst for Nike stock could be its Q3 FY21 financial results that are due out on March 18. But trying to time the stock isn’t imperative for investors thinking they are in it for the long run. And 15 of the 21 broker recommendation Zacks has for Nike come in at “Strong Buys,” with none below a “Hold.”

Like Nike, PepsiCo hasn’t needed much of an introduction for decades. The company is more diverse than its beverage rival, Coca-Cola (KO - Free Report) , with a portfolio that includes Frito-Lay, Quaker, and more. More recently, PEP landed a partnership with Beyond Meat (BYND - Free Report) in January that creates “a joint venture to develop, produce and market innovative snack and beverage products made from plant-based protein.”

PepsiCo’s 2020 revenue popped 5%, with 9% expansion in the fourth quarter. The company is projected to follow up FY20 with another 7% sales growth in FY21 that would see it pull in $75.23 billion, with FY22 then set to jump nearly 5%. PEP’s adjusted EPS figures are projected to climb by 9% and 8%, respectively. 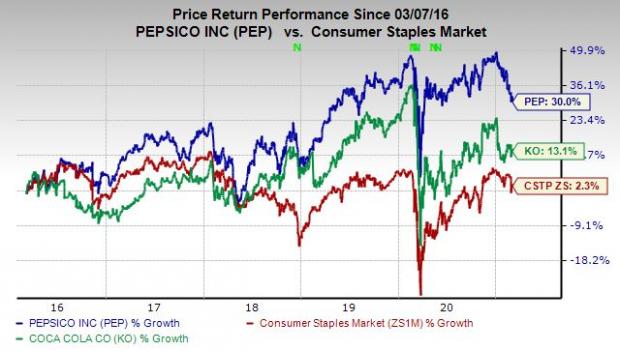 PEP stock has topped the consumer staples industry over the past five years, up 30% vs. just 3% and KO’s 13%. Despite its stable and solid growth outlook, its shares have fallen over 10% since the start of the year, to lag its peers.

PepsiCo was trading at roughly $129 a share on Thursday, which put it about 13% off its early January records. This pullback sent it into the oversold range at the end of February. Wall Street noticed and it popped on Thursday, as the rest of the market fell.

PEP’s valuation is more enticing as well, trading at a 12% discount to its own year-long median in terms of forward earnings. Plus, the company’s 3.2% dividend yield doubles the S&P 500, crushes the 30-year U.S. Treasury’s 2.3%, and roughly matches Coca-Cola despite its stock price outperformance. And PEP executives are set to raise its annualized dividend by 5%, starting with the June 2021 dividend payment.

The company’s earnings revisions activity has it sitting at a Zacks Rank #3 (Hold) currently. The consumer staples giant also consistently beats our bottom-line estimates and earns “B” grades for Value and Growth. PepsiCo is trying to adapt to changing consumer habits and its near-term outlook shows that there is solid demand for its diverse portfolio that ranges from Tropicana to Doritos.

Microsoft is the second-largest company in the world by market cap at $1.7 trillion, behind only Apple (AAPL - Free Report) . The historic tech firm is also not currently facing government scrutiny like Facebook (FB - Free Report) , Amazon (AMZN - Free Report) , Alphabet (GOOGL - Free Report) , and many others are—it had its day in antitrust court 20 years ago. More importantly, the company has never been more diversified and it remains invaluable to businesses and consumers around the world.

MSFT’s cloud computing space has boomed and it’s likely to drive growth for years. In fact, cloud has been woven into nearly all of its business segments, from its Office unit to its remote work products and its Xbox-heavy gaming division. “What we have witnessed over the past year is the dawn of a second wave of digital transformation… Microsoft is powering this shift with the world’s largest and most comprehensive cloud platform,” CEO Satya Nadella said in prepared remarks in January.

Last quarter, MSFT’s sales jumped 17% to nearly double our Zacks estimate and all three of its core units climbed by over 13%. The company’s commercial cloud revenue surged 34% to $16.7 billion to account for 39% of total sales.

Looking ahead, Microsoft’s fiscal 2021 revenue is projected to jump 14.3% to reach $164 billion, with its FY22 sales set to climb another 10.5%. Investors should note that these estimates come on top of three straight years of between 13% to 15% revenue expansion, which is highly impressive for a company of its size and age.

Analysts raised their bottom-line outlooks after its strong Q2 FY21 report to help it capture a Zacks Rank #2 (Buy) right now. The company consistently beats our EPS estimates, including a 15% average beat in the trailing four quarters. And its adjusted earnings are projected to climb 27% this year and another 10% in FY22.

The recent market selloff that began in mid-February hasn’t hit MSFT as hard as some other big tech names. Nonetheless, it has fallen about 8% from its Feb. 12 records to hover at around $226 a share. The stock has now fallen behind the Tech Sector, up 36% in the past 12 months vs. 47%. The pullback has also pushed it well below neutral RSI levels at 39, which puts it near its lowest levels since the coronavirus selloff last year.

Microsoft’s 1% dividend yield comes in above Apple’s 0.70% and its balance sheet is strong. The company finished last quarter with $132 billion in cash and equivalents. This will help MSFT keep making strategic acquisitions, raising its dividend, and repurchasing stock. And 20 of the 22 brokerage recommendations Zacks has for Microsoft stock come in at “Strong Buys” with the other two at “Buys.”