Amgen Inc. (AMGN - Free Report) announced an agreement to acquire clinical-stage, cancer-focused biotechnology company, Five Prime Therapeutics , for $38 per share or a total equity value of approximately $1.9 billion. The deal will boost Amgen’s oncology pipeline by adding Five Prime's lead candidate, bemarituzumab, which is being developed for a type of stomach cancer.

The acquisition is expected to be closed by the end of the second quarter subject to customary closing conditions, which include a tender of at least a majority of the outstanding shares of Five Prime's common stock.

Amgen’s stock has risen 4.6% in the past year compared with an increase of 4.1% for the industry. 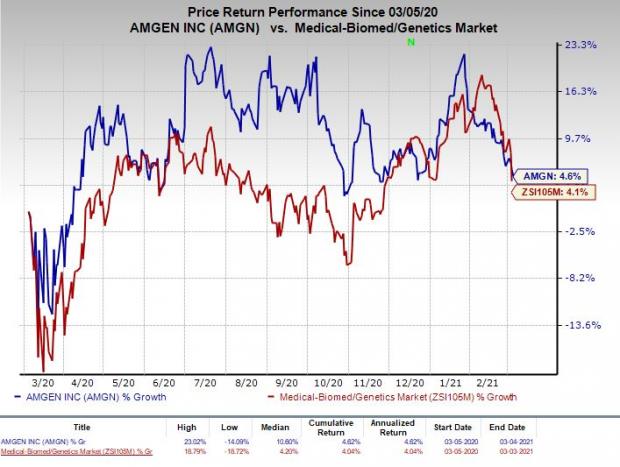 Please note that Five Prime has successfully completed a phase II study evaluating bemarituzumab in frontline advanced gastric or gastroesophageal junction (GEJ) cancer. The company had planned to start a late-stage study this year. Amgen plans to start a phase III trial as soon as possible. Meanwhile, Five Prime believes that the candidate has the potential to be developed in other epithelial cancers, including lung, breast, ovarian and other cancers.

Meanwhile, Amgen is working on expanding its presence in international markets. The company expects significant volume growth from the Asia-Pacific region, going forward. The acquisition of Five Prime is likely to support Amgen’s international expansion strategy as bemarituzumab development in the GEJ indication will help target the Asia-Pacific region as the disease is more prevalent there. Five Prime has an agreement with Zai Lab for the development and commercialization of bemarituzumab in Greater China. The Zai Lab deal will generate royalties ranging from the high teens to the low-twenty percentage points on future net sales from the candidate in Greater China.

Apart from bemarituzumab, the acquisition will also add an early-stage candidate, FPT155, to Amgen’s pipeline, which is being evaluated in patients with solid tumors. Five Prime has a few other pre-clinical candidates in its pipeline, which are being developed either solely or in partnership with Bristol-Myers (BMY - Free Report) and Seagen (SGEN - Free Report) . The partnered products have the potential to generate future milestone payments, based on existing agreements with Five Prime.

Amgen has an encouraging history of driving growth and boosting its pipeline through deals and acquisitions. Key acquisitions in the past added Kyprolis, Blincyto and Otezla to its portfolio, which have become important growth drivers for the company. We expect Amgen to be able to convert bemarituzumab into a similar growth-driving product a few years down the line.

Apart from deals and acquisitions, Amgen has a deep pipeline with several interesting candidates targeting inflammation, oncology/hematology and CV/metabolic diseases. Results from several pivotal programs are expected in the near term, which could act as catalysts for the stock. Moreover, Amgen’s biosimilar portfolio is a potential long-term growth driver.

However, several marketed drugs of the company are facing increased pricing headwinds in 2021 and continued COVID-19 woes. Biosimilars are also having a negative impact on its key products. Meanwhile, the softness in sales of Enbrel, Amgen’s largest product, is also a key cause for concern.