The biotech sector continues to be in focus with acquisition deals and drug approvals. Other pipeline and regulatory updates also grabbed the spotlight.

Amgen Acquires Five Prime Therapeutics: Amgen (AMGN - Free Report) announced that it will acquire a clinical-stage biotechnology company, Five Prime Therapeutics , for $38.00 per share in cash to strengthen its oncology portfolio. The offer price represents an equity value of approximately $1.9 billion. The acquisition will add the latter’s lead asset, bemarituzumab, a first-in-class, phase III ready, anti-FGFR2b antibody, to its portfolio. The transaction is expected to close by the end of the second quarter.

Five Prime has successfully completed a phase II study evaluating bemarituzumab in frontline advanced gastric or gastroesophageal junction (GEJ) cancer. Bemarituzumab targets FGFR2b, which has been found to be overexpressed in approximately 30% of patients with non-HER2 positive gastric cancer, as well as other solid tumors. Amgen plans to leverage its presence in Japan and other Asia-Pacific markets to maximize bemarituzumab's potential.

The approval was based on results from ZUMA-5, a single-arm, open-label study, in which 91% of patients with relapsed or refractory FL (n=81) responded to Yescarta, including an estimated 74% of patients in a continued remission at 18 months (Kaplan-Meier estimate). Among all FL patients, the median duration of response was not reached at a median follow-up of 14.5 months.

Immunovant Up on a Possible Buyout: Shares of clinical-stage biopharmaceutical company Immunovant, Inc. (IMVT - Free Report) surged after its major stakeholder, Roivant Sciences Ltd., announced intentions to acquire all of the outstanding shares of the former. Roivant already has a 57.5% stake in the company and is considering to acquire the remaining. It expects any potential transaction to be at a per-share price representing a premium to current trading levels.

Roivant is evaluating a potential public listing that would take effect prior to the consummation of any transaction with Immunovant. Last month, Immunovant suffered a setback when it voluntarily paused dosing in studies on IMVT-1401 due to elevated total cholesterol and LDL levels observed in patients treated with the candidate.

The company has informed its regulators and investigators of this voluntary pause on dosing in ASCEND GO-2, a phase IIb trial in Thyroid Eye Disease (TED), and ASCEND-WAIHA, a phase II study in Warm Autoimmune Hemolytic Anemia (WAIHA).

Acadia Plunges on Regulatory Update: Shares of Acadia Pharmaceuticals Inc. (ACAD - Free Report) plunged significantly after it announced a notification from the FDA about the identification of some deficiencies in its review of the supplemental New Drug Application (sNDA) for pimavanserin. The notification was sent on Mar 3 as part of the agency’s ongoing review of the sNDA.

The FDA has identified deficiencies that preclude discussions of labeling and post-marketing requirements/commitments at this time. The FDA stated that the notification does not reflect a final decision on the information under review. However, the notification does not specify the deficiencies identified by the FDA and no clarification has been received from the agency until now. The candidate is approved under the brand name, Nuplazid, for the treatment of hallucinations and delusions associated with Parkinson’s disease psychosis. 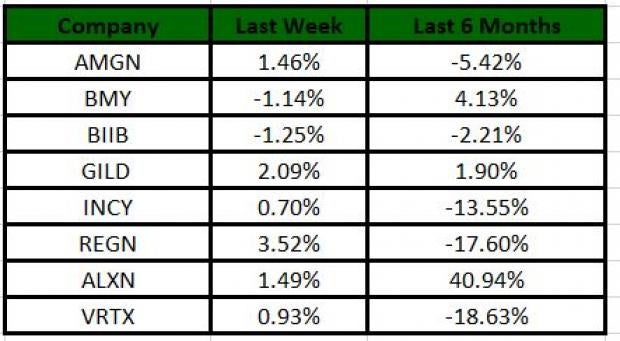