Some stocks are very cyclical in nature. Their business cycles dictate that certain parts of the year are heavily loaded with revenues while other times things can get lean. Today’s Bear of the Day is a company which profits the most during an accountant’s favorite time of the year, tax time. We are sitting a half-year away from next year’s deadline though so things could be a little rough.

Liberty Tax is a Zacks Rank #5 (Strong Sell) with a Momentum Style Score of F. Liberty Tax, Inc., together with its subsidiaries, provides tax preparation services and solutions in the United States and Canada. The company also facilitates refund-based tax settlement financial products, such as refund transfer products, refund-based loans, and personal income tax refund discounting, as well as provides an online digital Do-It-Yourself tax program in the United States. Its customers include taxpayers who, for reasons of complexity, convenience, or the need for prompt tax refunds, seek assisted tax preparation services.

The reason for the unfavorable Zacks Rank is the recent estimate revisions to the downside. Over the last week, analysts have dropped their estimates for the current quarter, current year and next year. The bearish sentiment has pushed down our Zacks Consensus Estimate from $1.60 to $1.20 for the current year while dropping next year’s number from $1.50 to $1.40. 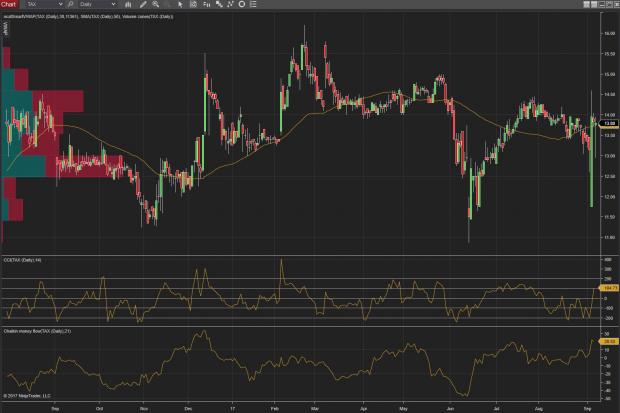 Shares of Liberty Tax have been choppy at best all year. After rallying up to over $16 in February, the stock came down to trade under $11 intraday in early June. Since then, the stock has failed to get over $14.50 for any sustained period. Currently the stock is trading near its 50-day moving average in the high $13s.

More Stock News: This Is Bigger than the iPhone!
It could become the mother of all technological revolutions. Apple sold a mere 1 billion iPhones in 10 years but a new breakthrough is expected to generate more than 27 billion devices in just 3 years, creating a $1.7 trillion market.
Zacks has just released a Special Report that spotlights this fast-emerging phenomenon and 6 tickers for taking advantage of it. If you don't buy now, you may kick yourself in 2020.