In the past week, Gol Linhas AereasInteligentes S.A. (GOL - Free Report) provided a bearish update on its operational trends in February. Thanks to the spike in coronavirus cases in Brazil, air-travel demand decelerated causing the carrier’s sales in February to decline 28% from the January levels.

Notably, due to reduced air-travel demand following a fresh wave of the pandemic in Brazil, demand for Gol Linhas’ flights in the domestic markets plunged 38% in February 2021 from the January levels as reported in the previous week’s write up.

Another Brazilian carrier Azul’s (AZUL - Free Report) February traffic also suffered due to the second wave of this deadly global infection in the country. Notably, the airline’s consolidated traffic in February declined 25.8% from the January figure. Consolidated load factor in the month dipped to 78.4% from 78.7%, sequentially.

1. Azul, currently carrying a Zacks Rank #4 (Sell), incurred a loss (adjusted) of $1.49 per share in the fourth quarter of 2020, wider than the Zacks Consensus Estimate of a loss of 80 cents. In the year-ago period, however, the company reported adjusted earnings of 95 cents per share. Meanwhile, total revenues of $331 million declined more than 45% year over year. Passenger revenues, accounting for 85.7% of the top line, plunged 50.7% year over year due to coronavirus-led suppressed air-travel demand. Cargo and other revenues surged 65.9% year over year, primarily owing to strong e-commerce growth.

2. Due to depressed demand, Gol Linhas operated 355 flights per day, on average, in February, indicating a decrease of 28% from the January reading. On peak days, it operated approximately 469 daily flights. The airline’s February 2021 capacity was 50% of the February 2020 level. Gol Linhas’ average load factor in February was 80.8%, reflecting a deterioration of 240 basis points from the January tally.

3. Southwest Airlines’ management announced that the company intends to introduce services to Myrtle Beach, SC; Eugene, OR and Bellingham, WA. While flights to Myrtle Beach will start this summer, the same to Eugene and Bellingham will begin in the second half of 2021. The carrier stated that it has “opened or announced” 17 new airports including the latest expansion initiative since the outbreak of the coronavirus in 2020. It further added that among these, the services which already commenced operations, proved to be fruitful. Witnessing steady demand, the company extended its winter service to Steamboat Springs, CO and Telluride, CO through this summer.

4. On Apr 17, 2021, Spirit Airlines will initiate services from LaGuardia airport to San Juan, PR (SJU). The flights will be available only on Saturdays. Additionally, the carrier will begin daily flights to Nashville, TN (BNA) from LGA, effective May 5, 2021. Spirit Airlines will also launch a Saturday service from LGA to Los Angeles (LAX), effective Jun 12, 2021. The carrier is also increasing frequency on some of its existing routes.

5. Per a Reuters report, American Airlines’ (AAL - Free Report) Flight 2555, a Boeing 737 MAX aircraft, travelling to New Jersey’s Newark Liberty International Airport from Miami, declared an emergency. The declaration came after the captain of the flight was forced to shut down one engine due to a possible mechanical issue.

Thankfully, the incident did not result in any casualty as the plane landed safely at Newark with 95 passengers and six crew members aboard. Per the report, the snag might have been due to issues related to an engine oil pressure or a volume indicator. 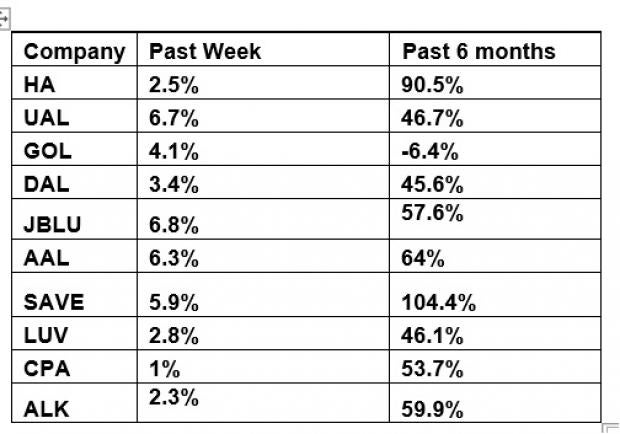 The table above shows that all airline stocks have traded in the green over the past week. Evidently, the NYSE ARCA Airline Index has gained 6.9% over the past week to $109.23. Over the course of six months, the sector tracker has also surged 78.2%.

Stay tuned for usual updates in the space.