Delta Air Lines (DAL - Free Report) also grabbed headlines as it announced its intention to increase flight operations to the state of Alaska this summer. The decision is backed the anticipated demand surge this summer following the uptick in air-travel demand, particularly on the leisure front. Notably, other carriers like Southwest Airlines and Spirit Airlines (SAVE - Free Report) also added routes recently to take advantage of the demand recovery as reported in the previous week’s write up,.

1. As part of Delta’s move to boost its services to Alaska this summer, the currently Zacks Rank #3 (Hold) carrier is focusing more on outdoor-oriented destinations. Notably, the city of Anchorage in Alaska will have plenty of non-stop flights by virtue of this expansion plan. Notably, on May 5, Delta will launch daily flights to Anchorage from Salt Lake City apart from serving the city on the weekends with flights from Detroit, Los Angeles and New York JFK May 28 onward.

Moreover, Delta aims to resume daily services between Atlanta and Anchorage from May 5 besides adding a third daily flight to Anchorage from Seattle and Minneapolis (also May 5 onward). Anchorage apart, another city in Alaska, Fairbanks, will see an increase in flight frequency as part of this extension of service to the state.

2. In an SEC filing dated Mar 15, United Airlines management stated that it “has seen improvement in customer demand for travel and new bookings compared to previous estimations in recent weeks”. As a result, it expects core cash flow to be positive in March, provided the improvement in bookings is sustained. United Airlines also anticipates core cash burn for the first quarter of 2021 to compare favorably with the fourth quarter of 2020 due to the “acceleration in forward bookings”.

Moreover, February 2021 operating revenues declined 64% from the 2019 levels. However, the metric is now projected to decline between 55% and 60% in March (earlier expectation was for a 55-65% decline) and from 45% to 55% in April from the 2019 levels.  Average core cash burn is expected to be $14 million per day for the March quarter, again reflecting an improvement from the earlier estimation of roughly $15 million.

Load factor (% of seats filled by passengers) is anticipated in the 65-70% band in March and between 70% and 75% in April. The projections reflect a marked improvement from the February reading of roughly 64%. Capacity (measured in available seat miles) is expected to fall merely 14% year over year in March, implying improvement from the 48% decline witnessed in February. Notably, capacity is expected to improve 83% year over year (previous estimate was for 81% increase) in April.

4. Also, driven by the recent uptick in leisure bookings, JetBlue Airways (JBLU - Free Report) now expects first-quarter 2021 revenues to decline between 61% and 64% from the first-quarter 2019 levels. The range compares favorably with the previous expectation of a revenue decline between 65% and 70%. Operating expenses for the March quarter are still expected to decline 25% from the level reported in the first quarter of 2019. March quarter EBITDA is now anticipated between a negative $490 million and a negative $540 million, which is better than the originally estimatedrange of a negative $525 and a negative $625 million.

5. In an effort to improve international travel to Hawaii amid the ongoing pandemic, Hawaiian Holdings' (HA - Free Report) subsidiary Hawaiian Airlines expanded its Pre-Clear program for Hawaii-bound passengers departing from Japan and South Korea. The Pre-Clear program allows international travelers who meet Hawaii’s pre-travel testing requirements to bypass the state’s 10-day quarantine protocol and an additional airport screening in Honolulu by having their documents verified before boarding. 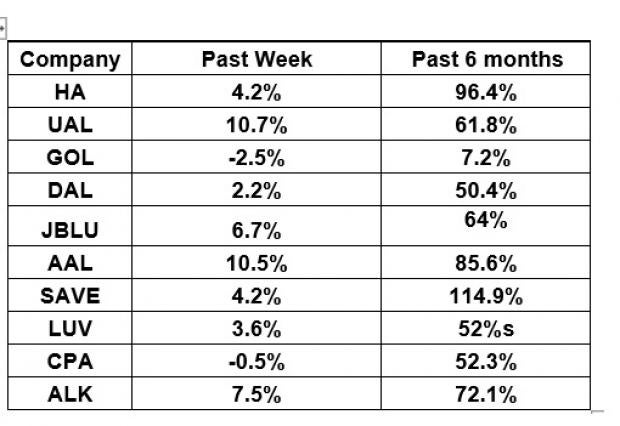 Investors will look forward to the fourth-quarter 2020 earnings report of Gol Linhas (GOL - Free Report) , scheduled to be out on Mar 18.