DICK’S Sporting Goods, Inc. (DKS - Free Report) has been long enjoying consumers’ confidence, as evident from its solid online demand and improved omnichannel capabilities, including curbside pickup services and BOPIS. In a bid to further strengthen its e-commerce business, the company extended its association with CommerceHub. Notably, DICK’S Sporting’s collaboration with CommerceHub dates back to 2015.

As part of this, the company inked a multi-year agreement with CommerceHub to enhance its digital supply chain which in turn will expedite its online orders. This move came after the company witnessed record-breaking e-commerce growth of 100% in 2020 driven by increased investments in technology and its digital capabilities including its vendor direct fulfillment network.

Moreover, in a recent development, the company launched its own men’s athleisure brand — VRST to cater to consumers shifting preference for comfort wear stemming from increasing stay at home trend. This latest product offering for today’s active men is now available on VRST.com and dicks.com.

The product line includes commuter pants, joggers and shorts along with tees, hooded sweatshirts and quarter-zips. Also, VRST comes with its own website, marking the second exclusive brand at DICK’S Sporting following CALIA by Carrie Underwood.

With activewear biggies like Nike (NKE - Free Report) and Under Armour (UAA - Free Report) planning to sell directly to customers, wholesale retailers are left with no other option to boost sales. As a result, DICK’S Sporting decided to tap into men’s athletic apparel, which is currently in trend.

Also, industry experts believe that the company is expected to give stiff competition to lululemon (LULU - Free Report) , Nordstrom and Kohl’s in the men’s activewear space. According to NPD Group, athleisure is said to have accounted for 45% of total sales in men’s apparel in 2020.

Moreover, the company revealed plans to roll out the VRST brand to more than 400 DICK'S stores across the United States in the coming weeks. Speaking of stores, management recently launched a DICK'S Sporting Goods store and four Warehouse locations. Also, it is on track to open three more DICK'S stores and a warehouse store in March.

In the past three months, shares of this Zacks Rank #3 (Hold) company have soared 46%, outperforming the industry’s growth of 14.3%. You can see the complete list of today’s Zacks #1 Rank (Strong Buy) stocks here. 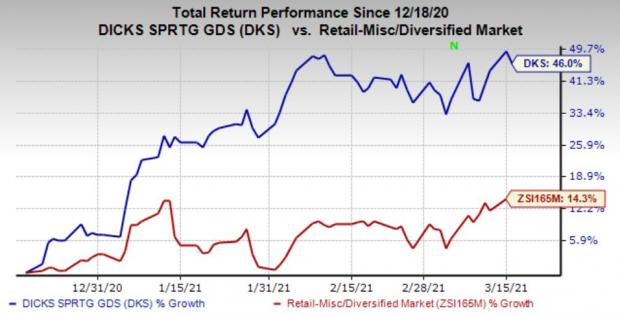