Reinforcing its efforts to establish a streamlined connectivity infrastructure, Bell, which is wholly owned by BCE Inc. (BCE - Free Report) , recently announced that it is set to bolster the deployment process of high-speed Internet across Quebec. The company is widely known for providing superior fiber optic technology to several business and residential customers with state-of-the-art broadband TV and Home Phone services.

Notably, Bell has been working actively with various suppliers and partners like Hydro-Quebec, a public utility company, to create a proper task force for the rollout of an enhanced network framework for telecommunications providers in Quebec.

Bell is considered the frontrunner in delivering high-speed Internet to rural communities in Quebec, along with its increasing fiber and Wireless Home Internet (WHI) networks. Impressively, the company had augmented its WHI service rollout in rural communities that included 137,000 additional homes by the end of April 2020, responding to the COVID-19 situation.

WHI is currently available in numerous homes across Quebec and Ontario. With Internet speeds of up to 25 megabits per second, the service is likely to cover 1 million homes in Quebec, Ontario, Atlantic Canada and Manitoba.

Bell has been leaving no stone unturned to aid service providers with easier access to communications support structures. Previously, the company had also deployed an effective action plan, which was primarily designed to provide avant-garde Internet services, particularly to the underserved communities of Quebec.

Some of these are establishment of a Centre of Excellence to share best practices with service providers and implementing measures to simplify the process for pole access requests. On the back of all these effective steps, Bell has witnessed significant developments in terms of deploying crucial communication structures across the Canadian city with prompt response times.

The company is expecting a surge in access requests in the upcoming period while driving the deployment of top-quality Internet services by September 2022. Markedly, the Brome-Missisquoi rural territory is likely to one of the first to avail the benefits of fiber optics in Quebec.

Bell has deployed Canada’s largest 5G wireless network, offering unprecedented mobile data speeds in Montreal, the Greater Toronto Area, Calgary, Edmonton and Vancouver, among others. It is well positioned to benefit from a robust postpaid business with subscriber additions and higher revenue contribution from prepaid services.

Markedly, BCE’s underlying business fundamentals are strong. Its robust liquidity position, underpinned by a healthy balance sheet, substantial free cash flow generation and access to the debt and bank capital markets, is expected to provide financial flexibility to execute on its planned capital expenditures. Although it continues to invest substantially in LTE, broadband and fiber, it is believed that the company may not be able to recover massive outlays from customers due to competitors’ short-term pricing of comparable services.

BCE currently has a Zacks Rank #5 (Strong Sell). It has a long-term earnings growth expectation of 5.1%. The stock has returned 26.4% compared with industry’s growth of 24.4% in the past year. 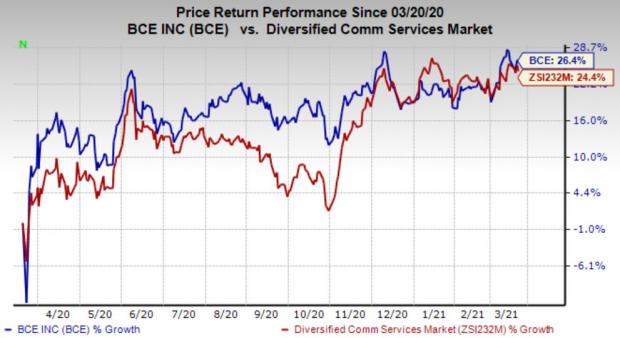 New Jersey Resources has a long-term earnings growth expectation of 6%.