4 Stocks in Focus as Diabetes Sector Grows Amid Pandemic

Following a pandemic-battered 2020, market watchers are pinning their hopes on an economic turnaround in 2021. The latest stimulus package of $1.9 trillion signed by the President last week, known as the American Rescue Plan, buoys optimism.

Per a report by Goldman Sachs published on CNN Business, the U.S. economy is expected to rebound sharply in 2021 following the latest economic rescue package. Further, it anticipates that the U.S. economy will grow by 8% by the end of 2021 compared with 2020.

Within MedTech, although the direct impact of this package is yet to be projected, sectors like minimally invasive and robotic surgery, diabetes care and remote patient monitoring are expected to receive a significant boost.

Here we discuss the prospects of the diabetes care market, which has been identified as one of the strategic areas investors are eyeing in MedTech.

Amid the pandemic-led hullabaloo, the diabetes sector was one of the MedTech sectors that held its ground due to the nature of the disease. Diabetes control is an essential way of preventing any untoward health emergency.

Given the widespread lockdown restrictions, physical activities of diabetics and their diets (due to limited food supplies) went for a toss. Also, limited access to anti-diabetic medications amid the pandemic was an added concern. Accordingly, demand for diabetes care device grew exponentially during the COVID-19 pandemic.

Per the National Diabetes Statistics Report 2020 by the Centers for Disease Control and Prevention, 34.2 million Americans suffer from diabetes whereas 88 million American adults have prediabetes. The space holds immense potential as this is an area where treatment cannot be deferred. Therefore, investing in companies engaged in diabetes management seems to be a safe bet for now.

With the gradual reopening of the economy and an expanding diabetic population, the companies engaged in providing diabetes care are continuously taking steps to cater to growing customer requirements. A notable company in this regard is Insulet Corporation (PODD - Free Report) , which launched the Omnipod DASH Insulin Management System (Omnipod DASH System) in Canada in January this year. The company also confirmed during its fourth-quarter 2020 earnings call in February that it registered year-over-year improvement in revenues on solid global uptake of the Omnipod. Over the past year, the company’s share price has surged 80% compared with the sector’s 28.4% rise.

Stocks to Keep an Eye on

Here we have discussed four companies, which are currently serving the diabetes management market and have been delivering robust performances of late. These stocks might turn out to be profitable for investors in the upcoming months. All four stocks have outperformed the broader sector’s rally in the past year.

Abbott Laboratories (ABT - Free Report) has been making concerted efforts to strengthen its diabetes arm. This Zacks Rank #2 (Buy) company witnessed robust sales in its Diabetes Care business during the fourth quarter of 2020 on solid worldwide adoption of FreeStyle Libre. In 2020, the company received U.S. approval for Freestyle Libre 2 and CE Mark for Libre 3 and Libre Sense Glucose Sport.

Its projected earnings per share (EPS) growth stands at 38.9% compared with the industry’s projection of 21.4%. Over the past year, the company’s share price has risen 58.5%.

Our next pick is a Zacks Rank #3 (Hold) company, Medtronic plc (MDT - Free Report) . The company confirmed that it has returned to growth in the fiscal third quarter in the diabetes business, which is particularly gaining momentum with the successful launches of 770G system in the United States and 780G, which is available in 26 countries across four continents. The company currently expects fiscal fourth-quarter organic growth within Diabetes to be in high single digits. Medtronic also announced the launch of InPen integrated with real-time Guardian Connect Continuous Glucose Monitoring data in November 2020.

Its Return on Equity (ROE) stands at 9.4% against the industry’s negative returns. Over the past year, the company’s share price has risen 50%. 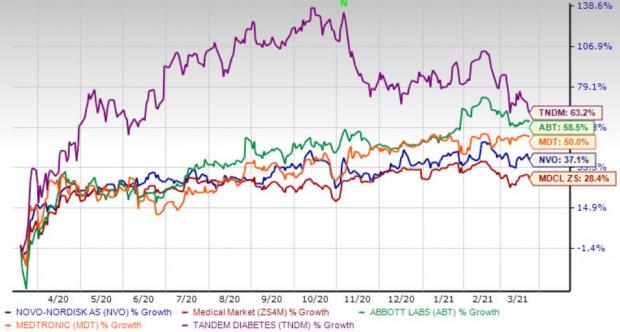 Next on our list is Tandem Diabetes Care, Inc. (TNDM - Free Report) . The company gained from robust domestic and international pump sales, along with robust domestic and international pump shipments during the fourth quarter of 2020. This Zacks Rank #3 company has been witnessing continued strength in demand for its t:slim X2 insulin pump across the globe and rising customer adoption of the company’s Control-IQ technology. The company also received the Health Canada approval for the t:slim X2 insulin pump with Control-IQ technology in November 2020.

Its projected EPS growth stands at an impressive 103.8% compared with the industry’s projection of 28.5%. Over the past year, the company’s share price has risen 63.2%.

Our final pick is Novo Nordisk AS (NVO - Free Report) , which is another key player in the global diabetes market. This Zacks Rank #3 company registered a solid start to its once-weekly injectable drug Ozempic during the fourth quarter of 2020. It also launched its oral diabetes treatment Rybelsus during the reported quarter. Novo Nordisk announced the submissions of label extension applications to the FDA and the EMA for Ozempic to introduce the 2.0 mg dose in January 2021 and December 2020 respectively. The submission is supported by the results from the SUSTAIN FORTE study, which included 961 people with type II diabetes in need of treatment intensification. With the 2.0 mg dose, more people with type II diabetes will be able to achieve the treatment target.