NIKE Inc. (NKE - Free Report) posted mixed third-quarter fiscal 2021 results, wherein earnings beat the Zacks Consensus Estimate, while sales lagged. Despite the effects of the pandemic-led disruptions, the company’s top and bottom lines improved year over year. The earnings gain can be mainly attributed to robust growth in the digital and direct businesses, lower operating expenses, and improved margins. However, sales growth slowed down in the reported quarter on the pandemic-led disruptions, particularly in North America and Europe, Middle East and Africa (“EMEA”) regions.

The lower-than-expected top line primarily resulted from shortages in the supply chain and port congestions in the United States, thanks to the pandemic-led disruptions. Additionally, the forced closure of brick-and-mortar stores across EMEA due to the resurgence of pandemic hurt the top line. Consequently, shares of the company dropped 3.9% after the close of the trading session on Mar 18.

Overall, shares of this Zacks Rank #2 (Buy) company have gained 1.2% year to date compared with the industry’s 3.6% growth. 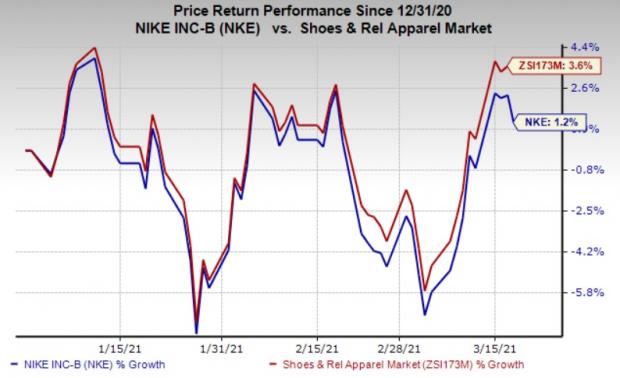 In the reported quarter, the company’s earnings per share of 90 cents rose 15.4% from 78 cents reported the year-ago quarter and beat the Zacks Consensus Estimate of 75 cents.

Revenues of the Swoosh brand owner grew 2.5% to $10,357 million but missed the Zacks Consensus Estimate of $10,945.7 million. On a currency-neutral basis, revenues were down 1% year over year. Although the top line benefited from robust digital sales and growth in Greater China, lower revenues at the wholesale business and NIKE-owned stores due to the aforementioned pandemic-led disruptions hurt the top line.

Revenues for the NIKE Brand were $9,773 million, up 9% on a reported basis. However, revenues for the brand declined 2% on a constant-dollar basis primarily due to declines in the wholesale business, driven by shipping disruptions in North America as well as compulsory store closures in Europe, both caused by the escalating COVID-19 cases. However, this was partly negated by double-digit growth in its digital business and the Jordan Brand.

Within the NIKE Brand, revenues in North America declined 10% on a reported basis and 11% on a currency-neutral basis. As already mentioned, North America revenues were impacted by wholesale shipment delays caused by global container shortages and port congestions in the West Coast of the United States. This increased the transit time and pushed back wholesale shipments by more than three weeks in the quarter, which resulted in the lack of available inventory at partner stores. This was, however, partly offset by 15% growth in NIKE Direct in the region, with more than 50% digital growth. Moreover, the company expects to capture revenues from the delayed inventory in the fiscal fourth quarter. Also, it notes that the digital momentum has continued into March.

In EMEA, the company’s revenues dropped 4% on a reported basis and 9% on a currency-neutral basis. Revenues were largely impacted by the mandated closure of about 45% of NIKE-owned retail stores in January and February due to the resurgence of COVID-19 cases. However, NIKE Direct witnessed a 60% sales increase on a constant-dollar basis, driven by triple-digit growth at the NIKE App. However, the company highlighted that about 65% of the stores in EMEA were open or operating at reduced hours as of Mar 18, 2021. Moreover, it notes that the NIKE digital demand has continued to increase in triple-digits in March.

In Greater China, revenues increased 51% year over year on a reported basis and 42% on a currency-neutral basis in the fiscal third quarter. The company’s currency-neutral sales in the quarter benefited from strong double-digit growth as it lapped the impact of COVID-19 in the prior-year quarter. The top line also benefited from strong digital sales growth of 44% in the region. Notably, the company witnessed about 60% growth in NIKE-owned retail stores in Greater China as the market returned to normal. This included double-digit growth in partner retail stores.

In APLA, NIKE revenues declined 7% on a reported basis and 8% on a currency-neutral basis. Revenues were partly impacted by the transition of its business model in Brazil to a strategic distributor model through its collaboration with Grupo SBF. This was offset by gains in South Korea and Pacific businesses. Digital sales in the region improved 70%, led by increased member engagement and the scaling of consumer services like member days.

Revenues at the Converse brand improved 13% to $570 million. On a currency-neutral basis, revenues of the segment were up 8%, backed by strong digital growth in North America and Europe.

Selling and administrative expenses declined 7% to $3,041 million, driven by tight operating expense management as well as lower demand-creating expenses. As a percentage of sales, SG&A expenses contracted 310 bps to 29.4%.

Notably, demand-creation expenses declined 18% year over year to $711 million on lower advertising and marketing spend for events and retail operations. Additionally, demand-creation expenses were aided by a shift in demand-creation initiatives to better align its investments with product delivery timelines and market conditions. Operating overhead expenses were down 3% to $2,330 million, owing to lower wage costs, disciplined expense management and reduced debt expenses. This was partly offset by investments in digital capabilities for the Consumer Direct Acceleration strategy.

NIKE ended third-quarter fiscal 2021 with cash and short-term investments of $12.5 billion, up $9.3 billion from the last year. These included proceeds from the corporate bonds issued in fourth-quarter fiscal 2020 and strong free cash flow.

NIKE temporarily suspended share-repurchase activities in March 2020 to preserve liquidity amid the pandemic. Prior to the suspension, it repurchased 45.2 million shares for nearly $4 billion. Consequently, it had a share-repurchasing capacity of $11 billion remaining under the current program. It expects to resume its existing share-repurchase program in fourth-quarter fiscal 2021.

The company paid out dividends worth $434 million in the fiscal third quarter, marking an increase of 14% from the prior year.

Additionally, the company issued its fourth-quarter fiscal 2021 expectations. It expects year-over-year revenue growth of 75% for the fiscal fourth quarter. This growth is likely to be driven by expectations of the easing of government-directed restrictions in Europe by mid-April and as inventory transit times gradually improve in North America.

The company anticipates gross margin expansion of up to 75 bps year over year, backed by continued shifts to the NIKE Direct business, which is more profitable. This is expected to be partly offset by increased logistics and freight expenses, and higher markdowns to clear excess inventory levels in Europe. SG&A expenses are envisioned to increase slightly year over year, driven by increased investments and demand-creation expenses toward pre-pandemic levels. Further, SG&A expenses will likely reflect higher investments to accelerate the pace of its digital transformation.

3 Other Stocks to Watch

Rocky Brands, Inc. (RCKY - Free Report) has delivered an earnings surprise of 120.9%, on average, in the trailing four quarters. It currently sports a Zacks Rank #1 (Strong Buy). You can see the complete list of today’s Zacks #1 Rank stocks here.

Abercrombie & Fitch Company (ANF - Free Report) has a long-term earnings growth rate of 18% and it flaunts a Zacks Rank #1 at present.

Deckers Outdoor Corporation (DECK - Free Report) has a long-term earnings growth rate of 21.5%. The company currently has a Zacks Rank #2.