Majority of work related to this deal will be executed in Newport News, VA and Quonset Point, RI.  The contract is expected to be completed by February 2030.

Interestingly, General Dynamics has been investing $1.8 billion of capital in expanded and modernized facilities at Electric Boat to support the growth in submarine construction. This will enable the company to cater to the solid demand for its Virginia class submarines in the shipbuilding market.

Being one of the only two contractors in the world equipped to build nuclear-powered submarines, General Dynamics enjoys a dominant position as a Navy contractor. Moreover, the United States is strategically strengthening its naval power by upgrading missile submarines, driven by the rising widespread geo-political tensions across the world.

Inevitably, demand for its technical expertise and other support services required for proper functioning of submarines also remains high. As a result, defense giants like General Dynamics enjoy a smooth flow of contracts like the latest one.

Per a Technavio report, the global naval shipbuilding market is expected to reach $14.36 billion during the 2020-2024 period, seeing a CAGR of approximately 3%. This, in turn, is likely to drive demand for various assault ships and submarines. General Dynamics — being a major shipbuilding giant — should benefit from these growth opportunities.

Shares of General Dynamics have gained 54.6% in a year compared with the industry’s surge of 43.7%. The company currently carries a Zacks Rank #4 (Sell). 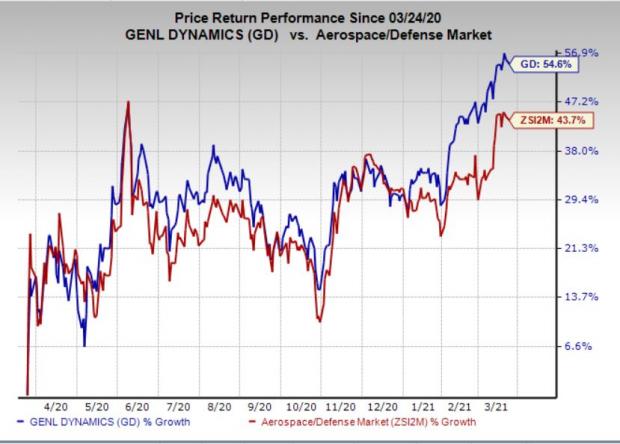