Equinor ASA (EQNR - Free Report) and partner SSE Plc are considering the sale of their stake in the final phase of the Dogger Bank Wind Farm in the North Sea of the U.K., known as the Dogger Bank C, per Bloomberg.

The 3.6-gigawatts (GW) Dogger Bank Wind Farm is an offshore wind farm, which is currently being developed in three phases, namely Dogger Bank A, Dogger Bank B and Dogger Bank C. Notably, it is a 50/50 joint venture partnership between the energy company SSE and Equinor.

The decision to divest stake in Dogger Bank Wind Farm, which is expected to become the world’s largest offshore wind farm, was made as oil majors are investing substantially in renewable projects such as wind and solar, as they seek to transform toward cleaner energy sources.

The offshore wind farm will use turbines from digital industrial company General Electric Company (GE - Free Report) and will power six million homes in the U.K. once the project completes. Notably, the project’s third phase is likely to be financially closed by late 2021. Both Equinor and SSE will own equal shares in Dogger Bank C.

The Dogger Bank Wind Farm is expected to become operational by 2026 and Equinor will be responsible for its operations.

Shares of the company have outperformed the industry in the past three months. The stock has gained 20.2% compared with the industry’s 19.9% growth. 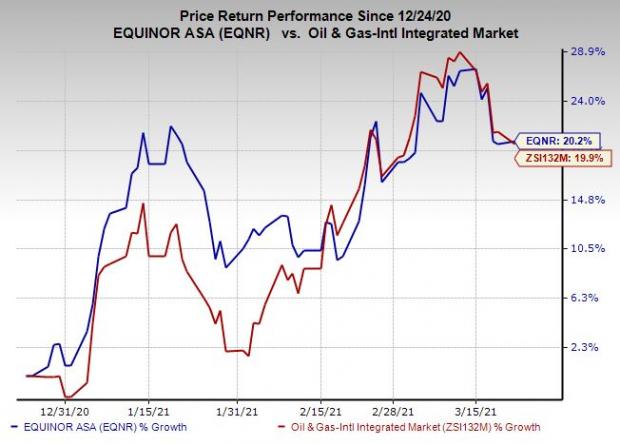