Performance during the quarter was affected by store closures, which were undertaken as part of the company’s de-densification efforts. Also, temporary store closures in Europe due to the COVID-19 pandemic were a drag on the company’s top line. The dismal performance in the quarter dented investors’ sentiments, as shares dropped 15.2% during the after-market trading hours on Mar 23.

We note that shares of this Zacks Rank #3 (Hold) company have skyrocketed 802% in the past three months compared with the industry’s growth of 45.5%. 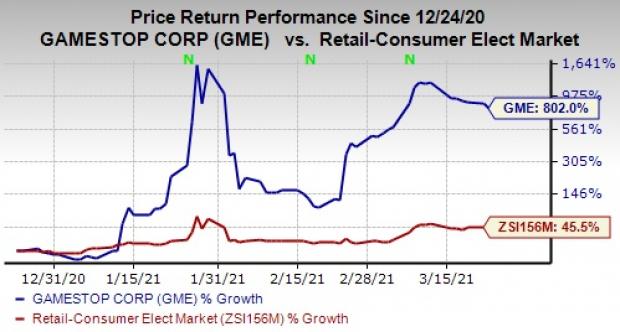 GameStop posted adjusted earnings of $1.34 per share, which missed the Zacks Consensus Estimate of $1.46. The bottom line increased 5.5% from $1.27 reported in the year-ago quarter.

Net sales amounted to $2,122.1 million, which missed the Zacks Consensus Estimate of $2,242 million and declined 3.3% on a year-over-year basis. The company’s top-line performance was affected by 12% decline in store base, owing to strategic de-densification strategy. Moreover, a 27% reduction in store operating days in Europe, due to temporary store closures amid the pandemic was a drag on the top line. Nevertheless, comparable store sales (comps) in the reported quarter increased 6.5%.

Notably, the company’s e-commerce business remained sturdy with sales surging 175% during the quarter under review. E-commerce sales were included in comparable store sales. Total e-commerce sales contributed 34% to net sales during the quarter compared with contribution of 12% in the prior-year quarter. Results gained from increase in demand for consoles, as the company transitioned from generation eight to generation nine console gaming products.

Selling, general and administrative (SG&A) expenses amounted to $419.1 million, down 18% from $511.7 million in the prior-year quarter. The company’s cost-optimization efforts aided this decline. Further, adjusted SG&A expenses declined 14% to $419.7 million in the reported quarter.

The company reported adjusted operating income of $28.9 million that fell 73.5% from $109.2 million in the year-ago quarter.

GameStop ended the quarter with cash and cash equivalents of $508.5 million, short-term debt of $146.7 million, long-term debt of $216 million and stockholders’ equity of $436.7 million. As of Jan 30, 2021, the company’s outstanding borrowings under its asset based revolving credit facility were $25 million, which were subsequently repaid on Mar 15, 2021. Following this repayment as well as the redemption of 6.75% senior notes due in 2021, the company had $48.5 million of short-term debt and $216 million of long-term debt remaining on its balance sheet as of Mar 15, 2021.

As part of the strategic store de-densification strategy, the company shuttered 232 stores during the fourth quarter and a net of 693 stores during fiscal 2020. Sales from these closed stores were transferred to the company’s online channel as well as neighboring locations. The company now operates 4,816 stores globally.

We note that the company undertook board restructuring during the fourth quarter. It added three new members — Alan Attal, Jim Grube and Ryan Cohen — to its board. The company also formed a Strategic Planning and Capital Allocation Committee for accelerating its business transformation. Since the formation of this committee, the company appointed a chief technology officer and several other executives with significant experience in e-commerce, customer care and technology. Recently, the company appointed Jenna Owens as its chief operating officer. Additionally, it appointed Neda Pacifico as senior vice President of e-commerce, while Ken Suzuki was appointed as vice president of supply chain systems. Management also informed that beginning from the first-quarter fiscal 2021, the company intends to transform its method of communicating quarterly results.

Stocks to Consider in Retail

Here's Why You Should Add Haemonetics (HAE) to Your Portfolio