Equinor ASA (EQNR - Free Report) recently announced the biggest hydrocarbon discovery in the Norwegian continental shelf (NCS) of this year till date. The discovery at the Blasto prospect was made through exploration wells 31/2-22 S and 31/2-22 A. It is located 3 kilometers southwest of the famous Fram field.

The location of the Blasto discovery is close to Equinor’s existing infrastructure, making it suitable for tied-back options. This means the development of the prospect in Norway will fall in line with the company’s climate ambitions. It intends to decrease emissions from the Equinor operated fields and onshore plants in the country by 40% by the end of this decade.

The new discovery can enable the company to boost production while keeping carbon-intensity low. It plans to become a net-zero greenhouse gas emitter by 2050. The integrated firm’s key strategy is to capitalize on the renewable energy space and align its operations with the Paris Climate Agreement. Thus, to combat climate change, the company is investing actively in renewable energy projects, comprising power generation from solar and wind energy.

Equinor used Seadrill’s West Hercules drilling rig at the site, wherein the water depth is 349 meters. The rig is now expected to move on to the next exploration well 34/6-5 S in production license 554. It is located in the northern North Sea sector.

The latest finding was in the production licenses 090, 090 I and 090 E. Equinor has Vår Energi, a subsidiary of Eni SpA (E - Free Report) , Idemitsu Petroleum and Neptune Energy as license partners.

Shares of the company have gained 67.5%, outperforming the industry’s 46.2% growth in the past year. 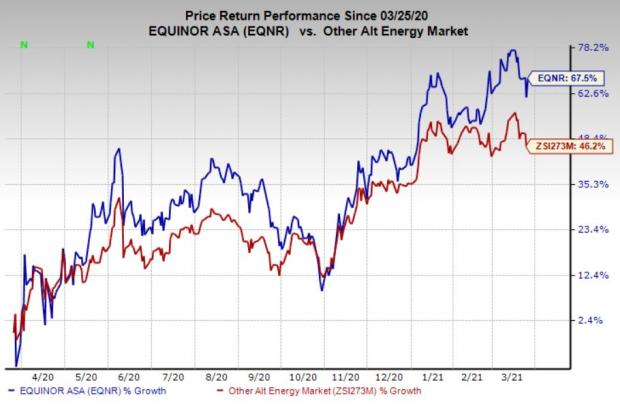 Frank's International’s bottom line for 2021 is expected to rise 46.7% year over year.

BP CEO Looney Gets Low Remuneration in 2020 Due to Pandemic